Indian cinema (across languages) has always loved police “dramas”. So a good part of my staple growing up diet consisted of movies where the hero’s an honest cop, fighting a corrupt system. The solution invariably is rather simple. The cop takes up vigilante justice, and bashes up everyone in sight while squeezing time out to romance a coy heroine and sing a few songs. Only rarely (the exceptional Sehar comes to mind) does Indian cinema even try to make a gritty, down-to-reality police drama.

So it has always been an absolute pleasure for me to watch English cinema where gritty, grey shades of police life are more starkly portrayed. Revisiting Serpico at leisure allowed me to relish the nuanced, very real cinematic version of the story of Frank Serpico, with Al Pacino in one of his earliest roles. 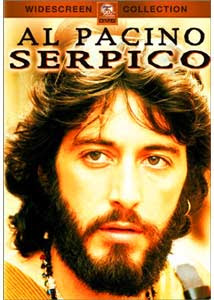 Serpico was an NYPD policeman, and joining the police department was the culmination of a lifetime goal. He first works on the beat, and then becomes an undercover plainclothes policeman working in Brooklyn and the . At every step in his job, he encounters widespread corruption. The system was elaborate, and each region had its own group of officers who went around collecting bribes or protection money. Serpico did not want any part of the corruption, and stayed away from it. And by refusing to take money, was despised by his fellow officers, who “couldn’t trust him”.

Serpico remains among Sydney Lumet’s best (his Dog day afternoon remains an all time favorite of mine) movies, precisely because he doesn’t try to force the movie in to cinematic drama. He takes his time in letting Serpico’s character develop, showing the gradual progression of an enthusiastic, honest cop in to a scared, confused, jaded and yet uncompromisingly honest veteran. And Pacino’s portrayal of Serpico, for many reasons, remains amongst his finest roles.

Serpico’s development in to a plainclothes cop is almost perfectly carried out by Pacino, and his appearance beautifully describes Serpico’s own anguish, from a clean shaven bright eyed rookie, through a handlebar mustache and finally unkempt long hair and bearded anguish. His encounters with police department corruption starts from the first day, where he doesn’t get the food he is supposed to in the police cafeteria. As he goes on the beat, other cops begin to suspect him of being “strange” or “queer” (with all its connotations), as he refuses to go on the take. The tension is slowly allowed to build, as Pacino superbly portrays the frustrations of being honest, with no where to go. He tries desperately to find ways to report this corruption within the police department, but has no where to go. His reports to the commissioner’s office, and then the mayor’s office has no response. Meanwhile, his frustrations build. The scenes where he comes home to scream at his girlfriend, Laurie, who cannot take the constant complaining from Pacino (who is cracking under the pressure of not being to tell anyone) are fantastic. He shuttles between ranting and sulky silence, and eventually Laurie leaves him. As everyone “busts his chops” (he can’t reveal the truth and alienate the police officers, who not so subtly threaten consequences; he can’t report his problems to anyone, and cannot go outside, to the press), Serpico’s anguish only builds, until he finally goes public, which leads to the well known Knapp commission

This movie reminds us why Al Pacino was such a highly rated actor. There is little of the ranting, screaming or “booyahs” that have come to mark his more recent performances. There is little hamming, even as Pacino becomes Frank Serpico (and the character does not become Al Pacino). Pacino uses his very expressive eyes fantastically in this movie, and doesn’t try to force dialog where there isn’t any need for it. His anguish (as Serpico) is very tangible and you feel the squeeze that’s being applied to him from all sides.

In addition to Serpico himself, the characters around him excel. The acceptance of widespread corruption, and the justification of the corruption by some officers is beautifully portrayed (“we don’t do any thing really bad. We don’t take drug money……the Italians, they’re different, they’re men of honor, so we trust them”) and makes you smile in irony. When an honest man (Serpico) becomes the bad guy (since every one else is dishonest), you almost nod in acceptance. The few other honest cops have no place to go as well, and all deal with the situation differently. The pace of the movie plays a superb role in defining the mood and the feel of the movie.

I was prompted to revisit Serpico after watching Scorcese’s The departed. There’s little in common between the movies, but Leonardo’s excellent portrayal of Billy Costigan, the undercover cop squeezed from all sides, reminded me of Pacino’s intensity as Serpico. Serpico pretty much set the benchmark for movies of this genre, and few have reached the standards set here. Classic is a word too easily used to describe old and successful movies. But Serpico was one of them.

I too thought of Serpico while watching "The Departed" .. I sure miss the days when Al Pacino didn't coast through all his roles by simply shouting .. it seems like years since he delivered a performance of the caliber of his work in the great "Serpico"

reel fanatic.....absolutely. It's been too long since Pacino underplayed a role, and avoided haming. Even in Scent of a Woman (for which he got the long overdue oscar) he was quite over the top.....and that was 10 years ago.

Aarthi....definitely a must see. Go to your nearest video store (or netflix or whatever else) and get it.

I too have a blog: www.aseemn.org. Do let me know if you liked it.

I am interested in blogrolling with you. Let me know your comments about it.

Hey I was just wondering if the movie Serpico was even close to similar to the book in certain details? I really liked the movie but was just seeing if the book was similar or not?

Once I played 12sky, I did not know how to get strong, someone told me that you must have twelve sky Gold. He gave me some 12sky gold, he said that I could buy twelvesky Gold, but I did not have money, then I played it all my spare time. From then on, I got some 12 sky gold, if I did not continue to play it, I can sell 12Sky Silver Coins to anyone who want.