Book Review: Atul Gawande’s “The checklist manifesto: How to get things right” 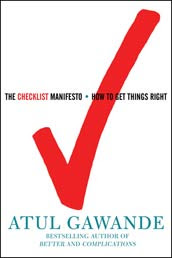 Ever thought about how healthcare could be improved? How doctors could reduce errors or complications during serious operations? Almost everyone has a theory on why hospital errors always occur. But Gawande, in his latest book “The checklist manifesto: How to get things right”, suggests that a major part of the solution lies in an innocuous and mundane a checklist. The book’s point is very simple. No mater what you do, checklists can help you do it better. This applies to the usual suspects (like the airline industry which pioneered checklists) as well as what would seem improbable; a hospital.

He sets us up well, starting with typical medical almost horror stories, of near misses and tragedies in the operating theater, and lays out what he calls “the problem of extreme complexity”. Medical cases are astounding in diversity and complexity. Problems can arise at any time during a medical procedure, and quickly go out of hand. So what can be done to improve this? Aren’t doctors and nurses doing their best already? And then, right away, he throws at you a solution so startlingly simple that you almost laugh it off. A checklist. Checklists work and are widely used in a whole range of professions (who sometimes don’t even call it a checklist). Gawande first describes a few cases in medicine that he came about during his academic research, which intrigued him because they achieved improvements that were way above the typical average in those settings. Piecing together the facts, he realizes that what works here is a little list of things that doctors and nurses run through before, during and after every medical procedure, as part of a defined yet flexible and adaptable checklist.

Digging deeper, he starts to explore checklists in a diverse range of industries. The airline industry is an obvious place to start, and Gawande draws us into the process by taking us to testing facilities at Boeing, starting from the first checklists the airline industry drew up in the 30s and 40s. But from there he starts seeing and then describing checklists in a whole range of industries, from the building industry to investment bakers, top chefs and Walmart. The story on the response to hurricane Katrina, the government bungling and incompetence, and the emergence of Walmart as an unlikely hero in New Orleans thanks to its superb enforcement of checklists is as amazing as it is inspiring. By the time he gets into specific studies in the medical profession, you already know that checklists make a huge difference. Then comes the studies he helped carry out in hospitals across the world, from rural Tanzania to crowded urban India through the UK and America. In every case enforcing these checklists dramatically improve hospital performance. And the items on the checklist are simple, obvious things. Check antibiotic, wash hands, change gloves, change tubing, that sort of thing. But in the heat of a critical operation, or when overwhelmed by huge patient numbers the obvious is often skipped. By setting up the checklist, giving nurses the authority to enforce them, and making medical teams work like a team the checklist becomes a staggeringly effective weapon, taking little time to enforce, but packing a massive wallop of effectiveness. The errors that come up can be quickly spotted and fixed, the entire medical team becomes more effective, and the doctor’s ego can be kept in check.

Regular readers of Gawande’s books or articles on healthcare in The New Yorker know that he is a consummate writer. He combines a doctor’s thorough knowledge of the healthcare system in America with the rigors of a scientist and the vivid imagery of a fantastic, old fashioned story teller. In his books you’ll find bits of the old sage, and the thriller writer, and the writer of a whodunit. The checklist manifesto is no different. With every old medical war story he brings up, and with every other profession he dives into, you are sucked into the details of that story, even while you shout out the solution; “a checklist!”. He draws you into the story, makes you feel involved in the process, and you gasp with him when checklists work, or scowl when medical professionals resist them, and smile when a great victory is won thanks to an error the checklist caught. Whether he overstates his claim or not, time, the clinical and hospital review process and accumulating evidence will tell. But he certainly does a fantastic job of convincing you that checklists can make a big difference in medicine. While medicine will remain a highly specialized skill requiring years of study and training, the adoption of a simple, rigorous, adaptable checklist is not only possible in medicine, but works magnificently.

Some might think that something as simple as a checklist does not deserve a whole book dedicated to it. By the end of this book though, even a seasoned skeptic will accept defeat. Through the book and this one simple point Gawande is able to give the reader a vivid description of the range of errors or complications in medical science, the immense complexity of modern medicine, and a whole host of issues doctors and nurses face in hospitals in every corner of the world, developed and developing. Some problems are not as disparate as one might assume. By the end of the book, it becomes obvious that some aspects of medical practice isn’t that different from any other complex (as opposed to complicated) field of work, and when checkpoints work so well elsewhere, there is no reason for it not to work as well in medicine. Even smart, intelligent, highly trained people can make mistakes, and checklists can help reduce them. And this is a smart, intelligent, simple book that is well worth reading.
Posted by Sunil at 1/13/2010 06:17:00 AM 9 comments: