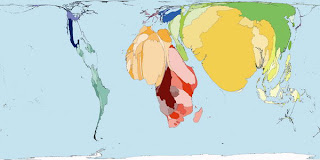 Strange looking map, isn't it? Well, it's just a modified map, a population cartogram, where the land area is shown in proportion to population. Except that this is an inequality map. Here, researchers have taken together data showing how many people suffer from a certain disease in a certain land area, and then represent the map proportionately.

This particular figure shows early neonatal mortality, the deaths of infants in their first week after birth. India has the highest neonatal mortality rate in the world (along with Pakistan, Bangladesh and other countries of the subcontinent).

Like the author says; "You can say it, you can prove it, you can tabulate it, but it is only when you show it that it hits home"

Statistics are hard to remember. Facts are easily forgotten. But pictures remain in the mind for a long time.

This paper in PLoS Medicine that I happened to glance at is fascinating for many reasons. A picture does indeed speak a thousand words.

To me, it was also depressing to be reminded how badly India scored on all of these. These are just raw numbers from the United Nations Human Development report, taken and plotted.

The explosive development in India is wonderful and welcome, but mostly meaningless if the basic indicators of human life remain depressing.

Everything has changed, but much remains the same. Red Queen comes to mind.

how true, witnwisdumb. How true.

wow! this is neat. really hit home. wonder if they have attributed causes for the neonatal deaths. is it the level of medical care or is it infanticide or a combination of the two?

sujatha....actually, this paper doesn't go into causes etc. It just shows how effective it is to use such cartograms to illustrate inequalities. Works much better than reporting statistics. But in South Asia (from my experience or what people have told me), it is a combination of a few things: 1) access to medical care (2) medical care during pregnancy (a lot of babies are born very, very sick) (3) immediate medical care after birth and there possibly might be a role of infanticide as well. The numbers vary from stat to state. As you can see, South India has shrunken in that map, mostly because of excellent numbers in Kerala, and good numbers in TN, above (Indian) average numbers in Karnataka, but poorer numbers in AP.