Stray dog, and its Indian avataar

Stray dog, or Nora inu was made by Akira Kurosawa long before he made Rasomon or Shinchinin no Samurai (Seven Samurai), or Ran, or any of his other magnificent movies that guaranteed his place in the pantheon of the greatest filmmakers of all time. But this movie gives us a superb preview of the stellar cinematic work that would follow.

The plot of the movie itself is very simple, but brilliant. A rookie homicide detective, Murukami (a very young Toshiro Mifune) has his gun pick pocketed in a bus. What would a cop do if his service weapon was stolen? The rest of the story unfolds as a panic stricken Murukami tries to recover his stolen weapon.

The movie gives us a superb insight in to post-world war II Japan (the movie was made in 1949). The country was slowly recovering from the trauma of the loss of the war, and this trauma and loss of honor is subtle but visible through out the movie, not just through Mifune’s role as the cop (who feels his honor is lost with the loss of the weapon, and wants to resign). As a heat wave strikes Tokyo, he wanders the streets in disguise trying to find his revolver. Kurosawa’s other talisman actor, Takashi Shimura plays the role of the senior detective, Sato, with whom the hapless Murukami is assigned to work with (by his benign boss), to recover the lost weapon. Detective Sato (Shimura) smiles and tells the rookie, “A stray dog sees only what it wants to see”, and the footage points to a dog, panting in the heat. As the story unravels, the plot thickens. The gun has a life of its own, and passes from hand to hand, leaving behind a gory trail, as the cops pursue it, always a step behind, leading to the thrilling climax. 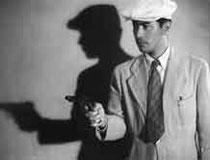 Given the simplicity of the plot, the script and screen play need to be absolutely perfect. And it is. Along with it, Kurosawa explores human nature, the effects of the war, and the social meltdown in Japan that followed superbly. And Mifune, though raw, has the suggestion of the swagger that would one day become screen legend. An early masterpiece from the Kurosawa stables.

Stray dog seems to have the perfect plot for an Indian rip-off. I can just see Mahesh Bhatt “adapting” it for Indian tastes. Anil Kapoor will effortlessly play the rookie cop (who just recently played a frantic husband in “My wife’s murder”). Going by Indian film tradition, he’ll play a person 15 years younger than he actually is, and will retain the exact same expression as he did in “My wife’s murder”. But, he’ll be a super cop who cannot stand injustice. The gun will be taken from him not by a pickpocket in a bus, but by a seductive damsel pretending to be in distress.

Cop Kapoor will now be forced to resign from the force (in an emotional scene, where the Commissioner will rip his badge off), and will vow to track down the culprits. This will obviously lead to a seedy bar (or a flashy discotheque), where Yana Gupta and extras will be vigorously shaking their booties (pardon my German) in an item number with no connection to the plot. There Cop Kapoor will discover the damsel (Isha Koppikar), who will be one of the bar dancers. He will confront her, and abuse her, and she, teary eyed, will reply 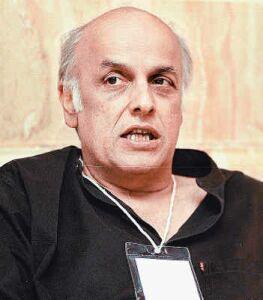 “Jaanna chahate ho ki maine revolver kyun churaya? To sun…”, and reel out how the villains kidnapped her, and forced her in to this life of shame. Love will happen, but because this is a movie with a difference, the songs will play in the background. Meanwhile, Cop Kapoor (and every one else) would have forgotten about the stolen gun, and a web of drugs and deception would have unraveled. A few slick action scenes later (a la the recent fiasco James), Cop Kapoor will also discover that the villain was responsible for the death of his brother, will avenge him, be restored to the police force (with the President’s medal), and live happily ever after with Koppikar.

I like the plot above....on a different note...am I the only one who found "My Wife's Murder" a pretentious yawn-fest?.. I was waiting for something to happen throughout the 2 hours ...not even Nandana Sen provided us any "insight" into her acting "talents" .

actually, Arnab....i thought "my wife's murder" was a yawn-fest also....though it started off quite well (decent first half). I thought the sarcasm was obvious in this post.....but i guess i need to work on that.

Vikrum said...
This comment has been removed by a blog administrator.
8:34 AM

First, after reading your post, I really want to see "Nora inu."

Second, I agree with you that Mahesh Bhatt is a rip-off artist, and that he could make a good "remake" of "Nora inu."

Third, you wrote, "Going by Indian film tradition, he’ll play a person 15 years younger than he actually is, and will retain the exact same expression as he did in 'My wife’s murder'."

How about Amitabh Bachchan playing the rookie cop? After all, he played a 40-year old cop in the (terrible) "Khakee." In "Lakshya" (worth seeing only because of the cinemaphotography) he played a Colonel (note: most colonels are in their 40s - not in their 60s). If Amitabh were the rookie cop, then it would be a big hit!

Hi Sunil
You must be a real old film buff. I watched a few Kurosawa movies but not this one.

Your discription of the policeman who has something stolen and then spends much of the rest of the movie search for it reminds me of another famous movie of that time: The Bicycle Thief.

Vikrum, I don't doubt that you'll enjoy Nora inu. I don't know if you've seen any other Kurosawa movies, but they are all textbooks in filmmaking.

Amitabh Bachchan could play the cop....but that wont be Mahesh Bhatt ripping off the movie then. And how ever hard you try....you cannot imagine Amitabh passing off as a rookie cop. At least he's now sticking to roles where he plays people in their late 40s......:-)

Plus, he wouldn't fit in to the item numbers and suchlike.....somehow :-))

Michael...yes, I really enjoy movies, old and new, good and bad. I must be a valued netflix customer by now. Additionally, i don't watch TV, but only watch movies.....so...:-)

The bicycle thief is a cinematic classic (cliche), and is fondly remembered amongst the best Italian films ever made......but there it's just a couple of ordinary people tracking his stolen bicycle. Here it's especially brilliant because its a cop, a protector of justice, who's the victim, and is sometimes powerless. And his frustrations are quite different!

a very nice read, and i suddenly want to get hold of a dvd of stray dog. I can imagine how the movie must be. and ur rip off thing was good. Came to ur blog follwing ur dowry post. Sad but true. I have met people hwo are actually proud of their achievement,read how much they r worth in the dowry market

sad, one hardly sees films by kurosawa in india, in vcd or dvd form. even hitchcock is hard to find in most shops! one feels real jealous of folks abroad who seem to have much better chances of seeing the masterpieces.

Thanks Anthony........it is indeed a very interesting movie. Yes.....when i wrote that earlier post, i was also shocked by the fact that people were not ashamed that they demanded dowry.

Nandakumar....yes, that's true. I only started watching Kurosawa movies after I came to the states, over 5 years ago. Since then, i've seen (and rewatched) almost all of them, and own a bunch of them. But you can find some of these movies in select video libraries or stores.