Here it is again, another edition of Everything Scientific, your one stop for some of the latest breakthroughs in science (the last edition for October). Earlier editions are available at the Science archives. Enjoy this edition, while I take a blogging break till Wednesday, and wish you all a very happy Deepavali.

What the surface (and core) of a comet looked like had until recently remained a mystery. What would happen if a huge metal object hit a comet? Would it disintegrate? Would it destroy the object? What? 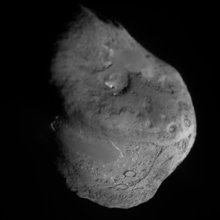 The solar system has two groups of comets. One resides in a region near Pluto (very far away), called the Kuiper belt. A section of these gets scattered and comes close to the sun and the earth. The other is much farther away, in the Oort cloud (includes the famous Halley’s comet). It was thought that these perhaps originated near the giant planets (Jupiter, Saturn, Uranus) and were thrown far away. We’re still learning about the origin of these comets. In a major international effort, researchers landed Deep Impact on the comet Tempel 1. The comet released huge amounts of powdery debris, and spectacular new information about the core and origin of comets was revealed. The nucleus seemed to have different layers, and contained organic material, ice and silicate materials. The similarities with the distant Oort belt comets was striking. It seems now that they might indeed have originated in a common region, near the giant planets, suggesting major turbulence in this region of the early solar system. This is the cover feature of Science (Vol 310, Issue 5746).

When it comes to anthropoid evolution, North Africa and South Asia (the continents were at different places in those times) is where it all seems to have happened (anthropoids are higher primates, which includes gorillas, chimps and yes, us), and a lot of fossils of early anthropoids (like Algeripithecus in Algeria ) dating before 45 million years ago have been found. Then the next large bunch of fossils found were dated back to a MAXIMUM of 35 million years ago. Cranodental (teeth and skull) evidence that showed how anthropoids evolved in these ten million years in between were somewhat scarce. Substantial changes had taken place between 35 and 45 million years ago.

Now researchers have found two new species of Biretia in Egypt, that date back to AT LEAST 37 million years ago. It’s a missing link in those 10 million lost years, and it shows many features that are in between what was 45 million years ago, and 30 odd million years ago. This throws new light in to migration patterns of early anthropoids. They might have migrated to Africa from Asia, or the populations might constantly have exchanged. We need a more complete set of new fossils to find out for sure. A big breakthrough for anthropologists (Science, Vol 310, Issue 5746, 300-304).
*************
The ground beneath our feet

It looks like the massive earthquake that devastated Kashmir is just a sneak preview of what India and Pakistan might expect. There is a 2500 km faultline that runs through Pakistan, Northern India, Nepal and Eastern India. The Indian subcontinent is pushing its way in to Asia, at a rate of 2 meters every century! There is a possibility of many more major earthquakes striking, with every break of a fault segment (Science, Vol 310, Issue 5746, 208). In recent memory, there have been major quakes in Latur (Maharashtra), Uttaranchal, Gujarat, and now Kashmir. Indian houses are not really quake resistant. It is perhaps high time that urban planners (An oxymoron in India?) start taking these aspects in to account. The costs are high. And it’s not just money that’s lost.

When gas prices rise, many of us start biking to work or taking the bus. This is normal adaptation, that evolutionary biologists call phenotypic plasticity. But can you get habits from your parents? Apparently, you can. Bird researchers in the Netherlands have found birds adapting rather uniquely. The birds studied adapted their reproductive trends to suit the local warming trends. Over the years, the region was getting considerably warmer, and so caterpillars were more abundant at different times of the year than normal (summer). Now, most birds used to have chicks when the caterpillars were abundant. Due to warming, caterpillars started showing up earlier, and there were less caterpillars when chicks came along. But a large majority of the birds continued to have chicks at the normal time (and survival rates decreased).

But some birds started timing their chicks for when the caterpillars were around (i.e. earlier than normal). This was good, and their chicks survived better. What’s amazing was that their offspring continued this trend of having chicks earlier. A clear hereditary trend of plasticity, that is not only random. Good stuff for the survival of the bird (and showing natural selection). Science, Vol 310, Issue 5746, 215

Noodles have been around for a while, in various parts of the world. There still remains some debate on whether it was invented by the Chinese, Italians or Arabs. But how old is it really?

Well…..Chinese researchers have found a superbly preserved sealed earthenware bowl in Northwestern China. The identified that it was millet that was the source of seed-husk and starch grains present inside the bowl. 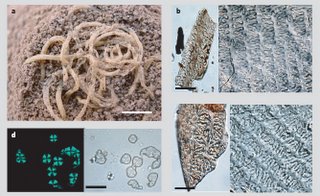 The noodles were thin (0.3 cm in width), over 50 cm long, and delicate, and resembled a traditional Chinese noodle that’s made by pulling and stretching dough by hand.

That certainly puts to rest some debates.

Stem cells are showing promise in all kinds of areas. Now, normal hair follicles grow, regress and rest for the rest of their lives. Researchers found that some of the cells of a hair bulb could undergo clonal growth in cell culture. People thought that they might indeed be real, multipotent stem cells that could sustain long-term hair follicle renewal. Recent work shows that this speculation is indeed true. Some of these cells were isolated from rat whiskers, and cultured. Then they were taken and transplanted in to newborn mice when hair was just being formed. This was then grafted in to nude mice (these are special mice which have no hair). Guess what? These formed all hair lineages , including the root sheaths, hair shaft, sebaceous glands, and epidermis, AND were found after many cycles. Now this is waaaay better than a hair transplant (where the hair is put in from a different part of your scalp, and will eventually die). Baldies, hope is on its way. (PNAS link).

Old school drugs against bacteria would try to kill them. That was the only objective. Bactericidal. Destroy them completely.

However, times are changing. Bacteria now are increasingly resistant to most antibiotics. What we consider routine (a treatment with antibiotics) might not be possible even a decade from now. New drugs against bacteria are scarce, and it is an ignored area (not a “cool” area of research any more), so we might be in big trouble. But this new need is resulting in new approaches to drugs against bacteria. One approach is not to focus on drugs that kill the bacteria, but to develop molecules that inhibits the virulence factors, the actual toxins in the bacteria. So here, the focus is not the bacteria, but just the infective agents in the bacteria. One recent effort has identified a couple of promising new lead drugs that prevent the Cholera bacteria Vibrio cholerae from expressing two critical virulence factors, cholera toxin and the toxin coregulated pilus. So this doesn’t kill the bacteria, but it does prevent the bacteria from colonizing the intestine (when tested in infected mice), and so prevents the disease.

An interesting and refreshing approach, which may well work in synergy with present antibiotics. (Science, Vol 310, Issue 5748, 670-674).

In an earlier post discussing the economics of conservation, I had discussed how costal forests (mangroves etc) and environmentally sensitive economic planning would have prevented some of the massive destruction that the tsunami caused. Here is another detailed report in Science (which includes authors from the M.S. Swaminathan Research institute in India), where they studied the protective impact of forests in Cuddalore (one of the worst hit districts in Tamil Nadu). 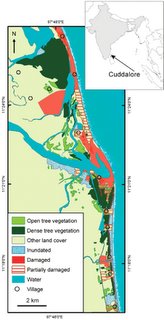 There is NO overlap between the greens, and the red and blue. Basically, the costal forest areas suffered almost no damage.

Hi Sunil
What an excellent collection of scientific tidbits. I found it all very interesting.

As for the birds and the caterpillars, surely the birds don't choose when to have eggs - it must be genetic. So it isn't surprising it is inherited. But why are they calling this a "bad habit"?

Very interesting post! I discovered this blog by following a link from Chocolate and Gold Coins, and I am so glad I did.

My research sometimes takes me to Asia, including India and the geological impacts one can expect in South Asia in the coming century. Even though the tectonic movements of the Indian subcontinent have been well documented, I was surprised that not many people are aware of it and they dont seem very interested in taking the necessary precautions. As you very rightly said, the costs are indeed very high!

Since you seem to be from India and interested in Science, I had a question which I am not sure if you could help me with. I was told by an Indian aquaintance that the recent heavy rains in India were predicted by the Tamil Nadu Chief Minister and that there is scientific evidence that there will be heavy rains every 60 years. I have been trying to get more information on this. But I forgot the name of the "Parth(something) year" (am still trying hard to remember Indian names) and no google search yields any results - so, if you know anything about it, would be really great. Otherwise, no worries - just thought I will try my luck.

Sorry I wrote such a long comment. And I definitely hope you have more volumes of everything scientific. :)

Michael...........yes, that was what was neat. Genetically, birds were programmed to have chicks at a certain time of the year. Because of climate changes, the caterpillars were now coming out earlier. So some birds changed their system, to have chicks earlier (breaking out of their normal pattern). This NEW trend was passed on to their offspring......really showing an aspect of natural selection.

Oh...i'm not calling this a bad habit. All i was saying in my title (All the sub-titles are my own) is that if we screw up we can conveniently blame parents. This is one of the better evidences of behavior and not just physical traits being passed on.

Sue......yes indeed earthquake costs are high. I don't know enough about predicting long term weather patterns (i dont think the weather forecasters themselves know about it) to really say anything about the 60 year old cycle. Your comment is welcome!

as always very interesting!! i like the variety of the topics chosen and the fact that even I can understand it! time for me to go and spout some of my new found knowledge! Happy Diwali

shoefiend, i'm glad you enjoy this, and it provides good conversation-fodder as well!