It’s that time of the month again; time to round up some of the coolest and latest happenings in the world of science. So here’s Everything Scientific Vol. III (the archives are here).

The final frontier, space, has become less of the unknown thanks to a series of satellites sent out to boldly go where no man has gone before. The satellite Voyager I (launched way back in 1977), has truly reached the unknown beyond, as it has just reached the outer atmosphere of the Sun, and reaching interstellar medium. What’s the big deal, you ask? The outer atmosphere of the sun expands into what’s called solar-wind. At some point, solar winds decelerate to finally merge with the interstellar medium. This deceleration is due to “supersonic flows” causing shock-waves (with rapidly decreased speed). This is like a supersonic aircraft (where there is a sonic boom, which decelerates the air ahead, enabling it to flow smoothly around the craft). The location of this solar termination shock was unknown and under intense debate. Thanks to Voyager, we’ll now know where it is. (four articles and an editorial in Science, Vol 309, Issue 5743, 2016-2029 , 23 September 2005).

Road salt is widely used across the Northeast and Midwest to help melt snow that accumulates on roads during winter. But now it’s becoming clearer that using these vast quantities of salt is having an adverse effect on local fresh-water sources. In some streams in Maryland, New Hampshire or New York, the salinity of the water has reached 25% that of seawater (that’s a 100 times more salt than pristine forest freshwater streams). Watersheds where there is a dense network of roads are by far the worst affected. Continuing use of rock salt will eventually lead to making a number of these water sources unusable. It’s perhaps high time to figure out better and more efficient ways of getting rid of snow on roads (Proc. Natl. Acad. Sci. U.S.A. 102, 13517 (2005) link).

Any ideas out there?

Nylon-6 is a very widely used form of nylon, used extensively in textile and industrial fibers, injection molding resins, and extrusion resins. These substances have tremendous uses due to their high tensile strength, chemical and heat resistance, and low friction. Almost all of us have used it in some form or another, and modern life is almost impossible without it. Nylon-6 is made from a precursor called caprolactam. Unfortunately making this uses a range of organic solvents and strong oxidants, and a pile of ammonium sulfate waste. Some recent research has found a more environmentally sound way of doing this, using microporous bifunctional aluminophosphate as a catalyst, and air the oxidizer, researchers converted cyclohexane to caprolactam with high efficiency, and NO Ammonium Sulfate waste (Proc. Natl. Acad. Sci. U.S.A, 102, 39, 13711-13712 (2005)link).

More power to such research!.

It’s really, really hard to directly link massive hurricanes to global warming. The evidence is not direct, or strong, and it has split the research community. Today’s cyclones are stronger than they were 35 years ago, but they are a lot less common than they were 35 years ago (Science 309, 1844−1846; 2005 and Nature 436, 686−688; 2005). It’s still hard to directly hold global warming (which is happening, and is a different issue) responsible for it all. Natural fluctuations seem to favor different hurricane patterns in different ocean basins. It might be nice if the media or groups stopped throwing their own notions or taking strong sides, and if research were allowed to progress and present its findings better.

The theory of “Intelligent design” was created to find a way around court decisions that barred the teaching of creationism in classrooms. It’s a vaguer concept than creationism and doesn’t try to prove it’s own explanation of the origin of species (it’s a back-door entry for creationism). A federal court in Harrisburg, Pennsylvania, is beginning to hear arguments on whether Intelligent design should be promoted in classrooms. Some parents of children in a school in Dover district have gone to court, saying that the school board is violating the constitutional separation of church and state by requiring a statement promoting intelligent design to be read by teachers before they teach evolution (see Nature 437, 596 (29 September 2005) for more details).

Teaching Intelligent design in a philosophy or religion class is one thing, but there is no room for superstition in science education. 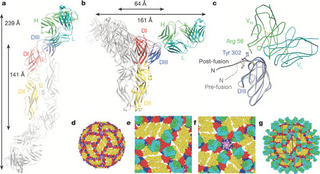 West Nile virus is a rather nasty virus transmitted by mosquitoes (not unlike the Japanese encephalitis virus that’s causing some scares in Northern India presently). A recent study researches the effect of a very effective monoclonal antibody which protects from West Nile virus challenge, even if given days after infection. Using X-ray crystallography, researchers have found the specific regions of the virus that this anti-body targets. They also find out that this inhibits the infection after the virus attaches, by potentially preventing the virus envelope’s conformational (shape) changes. This is a tremendous breakthrough (since it stops the virus AFTER it has entered, thus it’s independent of the mode of virus entry, of which there’s more than one) and points out to specific regions in the virus that a new vaccine can target (Nature 437, 764-769 (29 September 2005)).

In 2000, the Indian Ministry of Forests and environment commissioned a study called “Securing India's Future--Final Technical Report of the National Biodiversity Strategy and Action Plan”. This was to figure out how India should manage it’s tremendous biodiversity. Outside experts saw this as a model for other developing nations. The study apparently concluded that many aspects of India’s present model for development are unsustainable. Well, the government didn’t like the results, and so decided that the report should not be “published in full, or part thereof”. Ministry officials decline to comment further (Science, Vol 309, Issue 5744, 2146 , 30 September 2005).

I think we DO have a right to know what it says, and why the government doesn’t want it out.

Finally, to round up this edition of Everything Scientific, here are a few outstanding online resources for science education, with great bits of information for you or your kids.

The American Museum of Natural History’s “ology” site, on all “ologies”
The TryScience project with lots of little science projects for kids (or kids at heart).
Chemistry, Biology, or Geography for kids.

Greatly enjoy "Everything Scientific". John Stewart had a series of shows on ID (available as torrents now via commonbits.org). One of the interviews was with author of "Of Pandas and People", the creationist/ID claptrap book. The book was originally titled differently (forgot the title and later the name changed to mislead the gullible. Seems the words "Creationism" to "Intelligent Design" in the original book were changed and the same old book peddled back into circulation.

You know, the salt on the roads always made me uncomfortable too. Pity to find my suspicions to be well-founded.

Thanks Selva. You're absolutely correct about ID. I'll have a longer post on that some time.

It's important to remember that science does not take a stand on religion, but just reports facts as they are. There is no vested interest of "saving all souls" or rescuing the world.

Gawker....yes, it's a pity. I had lingering suspicions too (especially when I was in the midwest), but it's sad to find that the suspicions are true, and that salt is causing some long term damage to the water. There has to be an easier way to melt or get rid of snow on roads.

Hi Sunil
Nice post.
Yes, the salt thing is an issue. I had always wondered what ever happens to all that salt. Of course much of it goes into storm drains but then it gets into rivers.

Perhaps instead of using salt, they could just use more sand. The sand gives cars traction and doesn't harm the enviroment.

nice post! really enjoyed reading it! any thoughts on the ignobel prize given out every year?

Salt on the roads: Here in Norway (or atleast in Trondheim where I live), they use sand mainly as Michael suggested.

Nylon that's good for you: I did my summer internship (during my undergraduate studies) at a Nylon 66 plant. Nylon 66 uses hexamthylene diamine and adipic acid - not as bad as caprolactam that is required for Nylon 6. As Nylon 6 and Nylon 66 can be used interchangably (mostly) - why not choose the lesser evil?

Hurricanes and climate change: The global weather cycle (cyclone included) is like a pendulum - cyclic. What global warming is doing is basically giving the pendulum a push - altering the frequency and magnitute of natural phenomena.

Intelligent Design in Court: I read about this in the NY Times a couple of weeks ago (i think). As I see it, there can always be a good case for and against ID, but for science there is only a good case for it. NY Time also had a nice article here on the conflic between the two sides.

Managing India's Biodiversity: I do hope th ereport becomes public. All the same, I believe India is doing quite a bit (albeit not enough) to ensure a more sustainable growth.

Yes Michael......i've wondered why they don't use sand. I guess (short-term) costs of salt are lower. But even to a child.....using salt doesn't seem too smart.
Prahalathan, thanks. I'm glad you like it.

Shoefiend.....the IgNobels are fantastic, and every one (including the winners) love it. We have desi pride this year, with one of the winners being Indian-American (who invented an alarm clock that runs away and hides after ringing! Pretty nifty, I thought) :-))

Rahul....yes indeed. Nylon 66 is a lesser evil, and is gaining increasing use. It is more expensive to make though.
As far as ID goes.....i don't think there's any good case for it being taught in a science class. It's not science.....what ever its philosophical merits are (and i don't mind it being taught in a philosophy or religion class at all...in fact it might be a good idea there). But it's like teaching European history in a chemistry class....it just shouldn't be done.

As far as India's sustainable growth goes....you'll be surprised at how little is being done. The easiest "permission" (with the right strings) to get is from the environment ministry. I've seen first hand damage that's being done (rather needlessly) in Uttara Kannada district (an amazing biodiversity hotspot in the western ghats in karnataka) and around the kuderemukh forests (where there are steel mines. Most effluents just go in to the river. it's crystal clear before the mines, and reddish brown after).

hi! yeah i read about gauri nanda! have been threatening my husband with one of them! sorry about the exclamation mrks - i've had too much coffee and can not help myself :D

Nicely done. Looking forward to the next one. I am begining to find "Everything Scientific" very refreshing. Kind of like the morning cup of tea

I thought that invention was pretty nifty....and quite useful too......and IgNobels are usually in such good humor that the recipients don't mind them at all.

Onemore reason.....i'm glad you enjoy it. I'll do my best to keep them enjoyable.