Our sensory systems are incredibly fascinating. Readers of this blog might remember earlier posts on taste or smell or body temperature and longevity. Through our sensory systems we smell, see, hear, feel, and experience cold or heat. The Texas summer heat is beginning to get serious, so I thought it was high time for a “cool” post. Now, all of us experience feeling hot or cold, and thermosensing is an essential part of our own survival. But have you ever wondered how the body actually senses cold?? 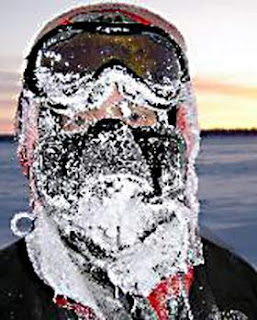 For many, many years researchers had hypothesized that the detection of temperature would occur through specialized protein sensors in the body, which would most likely be ion channels. Ion channels are proteins that form pores across cell membranes, and specifically allow ions to flow through them, thus controlling an electrochemical gradient. By doing so, the electrical gradients formed can control many biological processes, from vision to muscle contraction and your heartbeat. Vertebrate organisms have evolved numerous diverse ion channels, all with specific functions, in order to enable these diverse processes. Now, the specific channels that responded to hot or cold temperatures were largely unknown, and it was unclear what made a “sensory cell”.

Unknown, that is, until the so called TRP channels were discovered. The TRP (or transient receptor potential) channels were first discovered in fruit flies, where they played an important role in fruit fly vision. The TRP channels respond to a specific stimulus (different for each channel), which could be some molecule that (say) caused a sweet or sour taste, or sensed physical stress (touch), or bound a pheromone. When the TRP channel sensed this stimulus, it would open or close, and thus modify the movement of ions across the membrane. This electrical potential created would reach the brain and tell us what the stimulus was. While the first TRP channel was discovered in flies, it wasn’t long before dozens of genes (28, to be precise) encoding 28 different TRP channel proteins were found in mammals (from mice to men). Two important TRP channels (with respect to thermosensing) were TRPV1 and TRPV2, which were shown to be the sensors for capsaicin (hot peppers) or sense heat. Researchers immediately proposed that some similar TRP channel would be the primary sensor of cold.

About four years ago, a TRP receptor called the TRPM8 receptor was identified. This receptor was activated (and opened, to let ions through) in the presence of chemical cooling agents like menthol (which you love in your toothpaste, though it does absolutely nothing to clean your teeth). Some researchers immediately proposed that this protein was indeed the “cold sensor”, but many other researchers (with some supporting data) suggested that this receptor played only a minor role in sensing cold.

The issue has been more or less put to rest now, with some excellent work from David Julius’s lab, published in a recent issue of Nature (1). In order to see if TRPM8 was actually the sensor for cold, the researchers made knock-out mice for TRPM8, by introducing a stop-codon in the TRPM8 gene in the mice. By doing so, the gene no longer coded for a functional TRPM8 protein, and the researchers were able to verify that the mice carrying this mutation no longer had the TRPM8 protein in their sensory neurons. The next step was to show that the absence of this TRPM8 protein would make the mice insensitive to cold.

Proteins like TRP channels have a specific function that can not only be observed as an effect in an organism, but can actually be biochemically measured. Being ion channels, they allow the influx of specific ions (in this case calcium ions) that can be quantitatively measured in the specific cells that express the channel. So, the researchers used normal (or “wild type”) mice, as well as the mutant TRPM8 knock-out mice in their studies, and first removed specific sensory neurons from the mice. These neurons were then subjected to a battery of tests with capsaicin (for hot sensation) or menthol (for cold sensation). While the neurons from normal mice showed responses for both capsaicin and menthol (showing that the receptors for both these compounds were present and working), the mutant mice responded only to capcaisin (showing that removing this one protein, TRPM8 alone, was sufficient to prevent almost all electrochemical responses to menthol). Having clearly shown that TRPM8 caused the major response to menthol, they then decided to test if removing TRPM8 alone would be sufficient for the mice to no longer sensitively respond to cold temperatures.

In their next experiments, the researchers tested if the mutant mice themselves were compromised in their ability to sense the cold. In just one of their (many different) tests, they used normal mice or mutant mice, and placed them in a box where the floor had different properties at different ends. One end was kept at a normal temperature, while the other end was systematically cooled. The animals were allowed to explore both sides, and the time spent on either side was carefully measured. Normal mice preferred the side that was kept at 30 degrees centigrade. In sharp contrast, the mutant mice didn’t care on which side they were on, until the temperature dropped really low, to below 15 degrees centigrade. Also, the normal mice would always only cautiously explore the cold surface, while the mutant mice would confidently walk on the cold surface (not really knowing it was cold).

Collectively the studies have now shown definitively that just one single protein, TRPM8, plays the major role in sensing cold. Of course, at temperatures below 15 degrees, both normal and mutant mice largely behaved similarly, suggesting that there are more sensors for extreme cold. But the simplicity of the system for such complex regulation is strikingly elegant.

So, the next time you swish mouthwash in your mouth, feel that cool, cool sensation and wonder why it’s cooling, remember TRPM8.

Good ..
Hey You can view my Blog its also Good