Book review: The Physics of The Buffyverse 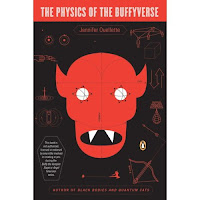 The Physics of the Buffyverse might just yet be the most unlikely title (or subject material) for a popular science book. I mean, Buffyverse? That fictional universe where Buffy the vampire slayer and her gang of Scoobies run amok destroying vampires and other such bizarre beasties (or is it the other way around)? The physics of Buffyverse? Using that most unlikely material as her inspiration, Jennifer Ouellette decides to write a book about some of the most interesting and important concepts in science.

The Buffyverse is undeniably a crazy place. Of course, given that you can find almost anything in California, if a fictional Sunnydale had to exist, it would be in Southern California. And here is where the Hellmouth is located, connecting the world with another dimension, filled with vampires, witches and a host of other unworldly creatures. So, where does science fit into all this gobbledygook? It’s hard to imagine, but Ouellette uses episodes, events and characters from Buffy to explain science concepts, and the science in the Buffyverse itself.

My impressions of a book are not always totally unbiased. If the book starts well, I almost always will finish reading it. If it doesn’t start well, even if the book starts to become fascinating, I invariably have a poorer opinion of it. In this case, the first chapter of the book is fantastic (and of course, I finished the book). Ouellette starts to describe the various types of demons in the Buffyverse, and surprisingly (but very convincingly) draws parallels from the natural world. While describing Dracula (or a creature who thought he was Dracula) Ouuellette draws out historical fables that described the evolution of the modern day Dracula, and then goes on to describe how some of the aspects of vampire lore that actually resemble real diseases or phenomena. For example, there is a hereditary disease called porphyria, where the body doesn’t have enough heme (which is an iron-rich pigment in the blood, essential for binding and transporting oxygen). In certain types of porphyria, patients are super-sensitive to light. It perhaps was also true that porphyria patients were given fresh blood as a remedy (though it doesn’t work). Could this have been a starting point for the legend of the vampire or werewolf? The first chapter builds on from this, and delves into other creatures of the Buffyverse, and how sometimes they draw parallels from real animals or plants or insects, and how (even more frequently) they violate the laws of physics or chemistry.

Surprisingly, some of these parallels work, and Ouellette does write with a simple, engaging style that avoids too much scientific jargon. From this starting point, Ouellette starts to draw from more Buffy material. There’s plenty of magic in Buffy, and that almost invariably means plenty of flashes of lightning, or sparks emanating from some demon’s hands, or someone disappearing in a flash (followed with some smoke). These provide excellent examples from which to build on the concepts of electromagnetism, conduction, the atom, or thermodynamics. However, it sometimes becomes a stretch when Ouellette starts to reason out plausible explanations for magic.

As the book goes on, and starts delving into more complex aspects of Physics, the subject matter sometimes seems to hold back the book, and the explanations of concepts. It becomes harder to accept the analogies that Ouellette makes from Buffy, as she starts to explain wormholes (“shortcuts through space and time”), or string theory, or even the improbability of time warps. But to Ouellette’s credit, after every section that seems to be too much of a stretch, she comes up with very imaginative ways to illustrate some of physics’ most complex concepts using Buffy examples. I had to smile while reading the section on Schrodinger’s “cat in the box”problem. Here Ouellette reminds us about Miss Kitty, Willow’s adopted kitten. The kitten appears on a couple of shows, and then mysteriously disappears, and there’s some vague explanation of a cross-bow accident, but no clear story. So, is Miss Kitty dead or alive? Ouellette imagines a room where Miss Kitty is in a corner, in front of a loaded crossbow, which is triggered by a Geiger counter, and there is no one in the room. For the Geiger counter to click, a radioactive uranium atom must decay, but has a 50% chance of decaying. If it decays, the crossbow will fire, and kill the kitten. If not, the kitten would be alive. Logically, the kitten cannot be both alive and dead. But to find out if it is alive or not, we need to enter the room and see. What is the state of the kitten before we enter? Now this, I thought, was an extremely imaginative way to describe the “cat problem” AND use an episode from Buffy to explain it!

Still, it is difficult to be constantly intrigued by Buffy craziness. Unfortunately for Ouellette, her choice of subject material, Buffy, holds back the book (and this is purely my own opinion). Buffy, though a cult-classic, is not that kind of cult-classic. It is not Star Trek. Most Trekkies are dedicated science buffs, and a whole bunch of scientists are devoted Trekkies. They love to watch, and re-watch endless episodes of Star Trek, and analyze where the science was incorrect or highly improbable (teleportation, or even “warp speed”), or where it was plausible (a silicon based universe), or where the creators got it just right. Unfortunately, the biggest fans of Buffy aren’t science geeks. It falls squarely in the realm of fantasy which is mostly improbable or absurdly impossible (which Ouellette gets, of course, and uses often in her book). Some of us science buffs devotedly watched Buffy purely for the ravishing Sarah Michelle Geller, some great action sequences, and little else. Many of the science concepts explained in the book, while well written, may not appeal to a hard-core science buff (though I mostly enjoyed it). There is a lack of detail on many topics (which is understandable in a popular science book). This is where the power of a footnote could come in. With footnotes, authors can often explain details of scientific concepts that need more explanation (for the serious science buff), but which allow a less interested reader to ignore. Some footnotes (with the equations behind the science, or more information) would have gone a long way in adding substance to the book. On the other hand, devoted fans of Buffy may not spend sleepless nights worrying about how a vampire could not reflect off a mirror (if we can see them, they must reflect light. If they reflect light, they will reflect off a mirror), but can be knocked out by a baseball bat or bump into furniture. I’ve known a few dedicated Buffy fans, and none of them cared for the science behind it.

Any technology far more advanced than our own present technology or science will appear as magic. This was something the creators of Star Trek realized, and so (like a lot of Sci-fi) by placing themselves in the future made their own gadgets more plausible. However, the Buffyverse is all magic. It does not try to, or pretend to, have rational explanations for anything. Sometimes it goes out of the way to make something impossibly unscientific. Therein is the problem. One cannot always successfully explain science by basing your explanation on the absurd.

So, Ouellette certainly has written an excellent book to bring together her two great loves (Buffy and Physics, incase you were still wondering), but that may not be what we all crave. Still, I certainly did enjoy the book in parts. It is not a book that I could read for long hours at a stretch (something I usually do with most books), as it got a little repetitive, and sometimes was too simplistic. But it did work very well when read in small bits over many days. It is a welcome addition to the growing list of accessible popular science books that deal with detailed science. But it is not a science book I’d keep going back to.
Posted by Sunil at 2/27/2007 08:58:00 PM

I have not yet watched any episodes of Buffy, but I am a fan of the Blade and Underworld series. Though both tend more towards sci-fi than fantasy (I hate people who tend to club the two), as you mentioned the science itself is rarely important. In that context this book sounds really good - especially the parts you mentioned.

It is important to trace the origins of legends and myths to their less startling and more humble origins. It helps us understand history, and also how the modern rumor/urban legend mill works.

kiran......even though I normally wouldn't admit it in public, I really like the Blade (at least the first part) and Underworld (both parts!) series. But I always am careful to distinguish fantasy from sci-fi. Star Trek is sci-fi. LOTR is fantasy. I like them both.....but fantasy is NOT science.

This book was interesting......and though it isn't on my all time fav science books, it isn't bad, and the analogies are more than interesting.

I like a game which needs to use shaiya gold, when you do not have shaiya money, you must borrow cheap shaiya gold from friends, or you shaiya online gold. If you get buy shaiya gold, you can continue this game.