I could have been Luke Skywalker

But one of the most enduring images from the Star Wars trilogy is Luke watching the two suns of his home planet Tatooine set.

Two suns for one planet. 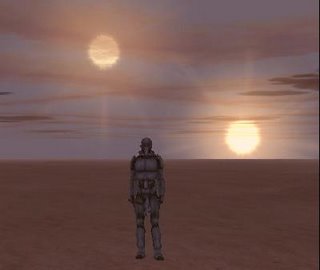 And our own lovely earth could have had them.

When the solar system formed from instellar gas and dust, most of the stuff that didn’t fall inward and form the sun was condensed to form Jupiter. If Jupiter had been just a few times larger, its interior would have started thermonuclear reactions, and become a bonafide shining star. Even now, Jupiter gives out more than twice as much energy as it receives from the sun, and gives out enough energy in the infra-red spectrum to almost be considered a star.

So, depending on how you look at it, Jupiter isn’t necessarily the giant planet bully, but it’s just a failed star, a washout.

It’s just fascinating to imagine what would have happened to the earth had Jupiter actually become a star. What would have happened to days and nights? Would we even have nights? If there were no nights, would life have evolved the same way? What about the crucial day-night cycles of the biological clock? Circadian rhythm? The counter regulation of the metabolic clock? Would humans/mammals have ever evolved (since sleep, either diurnal or nocturnal, is so essential for survival)?

Would I have been Luke Skywalker?

(Interestingly, I recently read that Alpha Centauri, the closest “star” to the solar system and earth, isn’t just one star, but a THREE star system. Two stars orbit each other, and a third, Proxima Centauri, orbits these two. Now, if these stars had planets, and if they had life, it must be a sad life out there, with no night, and perhaps no sleep. Isn’t sleep the best thing about life?)
Posted by Sunil at 9/06/2006 08:40:00 AM

Interesting... But how many times larger should Jupiter have been in order for it to have become a star? And if it were so many times larger, what would be the gravitational effects of such a massive body be? Would it not have altered the configuration of the planetary orbits at least slightly?

The physics of one body orbiting another is fairly simple to understand. But the three star system that you described... phew. It would be very cool if you could do a post that explained that! :D

Grrr. Sorry, delete the extra 'be'.

I think what skywalker sees is a binary star system with to stars revolving around their center of mass, and his planet in orbit around both the stars...

If, jupiter had really become a star, then either earth would have ceased to be formed at all or it would have to be somewhere near neptune (in which case we could see two suns setting.. ).

For Jupiter to be considered a star it should have its own planets. When Earth is revolving sun, it is part of sun's system. Earth should revolve around both sun and Jupiter together to be binary star system , isn't it? Just a curious question.

witnwisdumb.......the physics of a three star system is beyond me, so I'll hardly do justice in explaining that! But if Jupiter was about 5-10 times bigger, it would definitely be a real "star". And it absolutely would have altered the configuration of the planetary orbits substantially.

dinesh....in a way Jupiter does have it's own planet system.....it's got dozens of satellites, and the four biggest are really very large. Io, Europa and Callista are almost as big as pluto (now downgraded from planet status, but still a "dwarf planet"), while Ganymede is bigger than Pluto, and is almost planet size (it's the biggest satellite after Saturn's Titan). So, in a sense, Jupiter a little sun. If there was life on Europa or Io, the inhabitants would have their own Jupiter, and a big sun :-)

Puzzledlife....this ofcourse is all just in fun. Just as much fun as it would have been for me to have a light-saber.

Jupiter gives out more than twice as much energy as it receives from the sun, and gives out enough energy in the infra-red spectrum to almost be considered a star.

Do you mean to say some day Jupiter can disqualify as a planet too? :)

Had Jupiter been a star we would have missed Sabu!

heh....who knows, if the society for astronomy or whatever decides to redefine things again, Jupiter might get the promotion! But then we'll have way too many stars, and yes, we would have missed Sabu, and that would have been tragic. What would chacha choudhry do?

Jupiter would have had to be 80 times bigger than it is now to become a dim M-class star, which wouldn't really effect us much at all gravity-wise.