Seattle's Independent South Asian Film Festival started its screening with the screening of Shonali Bose's Amu, and the experience was quite fulfilling.

When Indira Gandhi was assassinated, I was about six years old. Still, I do have some childhood memories of the family glued to the TV, watching Doordarshan news and the telecast of the assassination. But, living in Southern India, I guess at best we heard some stories of some "riots" in the North. It didn't seem like a big deal. There weren't large populations of Sikhs in South India. There were no riots. It all seemed distant, and my own memories are dim.

Amu turned out to be a sharp reminder of what happened, and how little has changed since then. The story is about Kaju (played by the irrepressible and always exceptional Konkona Sen Sharma, who, if she doesn't have a fan club, has one now started by me), an Indian-American, visiting India (and her extended family) from Los Angeles. The director, Shonali Bose, uses a rather interesting method to lead up to 1984 through Kaju. The first half of the movie is light, meandering along with some snippets of everyday city life, of college students in Delhi, some banter and light heartedness as the story proceeds. It is more a gradual unfolding as Kaju slowly learns about her past, and about 1984 from a very naive perspective (like many other people, she didn't know that it even happened), but gradually learns that she is intrinsically tied to the Sikh riots. 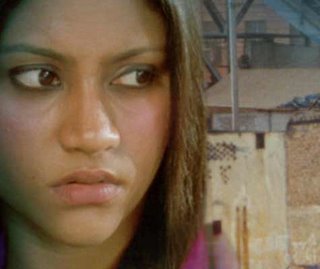 I felt the movie jumped a little abrubtly into the deapth of the riots, and tragedies that followed, the horror and the continuing travesty of justice. However, the performances by the characters (Sen Sharma, the always reliable Yaspal Sharma, Ankur Khanna, and (surprisingly) Brinda Karat are very sincere and compelling. This more than made up for the discontinuity in the movie.

The movie did however remind us of the horrors of the riots, and of the complicity of politicians, police and bureaucracy in these riots. It was not one or two people who orchestrated it (Tytler or Bhagat are just two politicians who led the carnage, but there were dozens more), but many, many more. The movie also reminds us of the many families and individuals who helped hide many Sikhs (their friends and neighbors), some times accepting great risk to their own lives. The movie maker, Shonali Bose, was there to answer questions, and most questions brought out these facts, which many of us have forgotten, or never knew (it is another matter altogether that sometimes the discussion diverged and some how ended in Iraq).

A lot of water has flown from the Ganges to the Bay of Bengal since then. And most of the victims of the tragedy (an estimated 4000 odd killed), the survivors who lost their families and livelihoods, still remain without justice.

A Sikh prime minister of India has not been able to change that.

The movie ends with a (somewhat cliche) news clipping of Godhra. And history repeated itself.

But yes, I have been a fan of Konkona Sen Sharma for all her performances. Your review wants me to take a look at this movie all the more, but alas... I guess I will have to wait.

Liked your blog... will be visiting more often.

Should be an interesting watch. I stay in Delhi and remember how we used to stay awake all night on the Terece to watchout for the mobs. They were just opportunitist but dangerous.

Konkona does deserve a fan club.

sudipta.....if you're in the States, the movie is going to be released here in a month or two, so keep your eye out for this. If you are in India....it might still be running in some multiplex somewhere.

Hiren........it certainly is interesting, to say the least. If you actually remember the riots, or have seen them, it is something else, and you'll find the movie moving from a deeper perspective.

"A Sikh prime minister of India has not been able to change that." is a really odd way of remembering what Manmohan Singh was doing in 84.

actually.....it isn't about what he was doing in '84. It's about what's not being done even today, 22 years after the riots. The victims still dont have justice, and not one of the leaders of the rioters has gone to jail. That's what's so tragic. The killers of Indira Gandhi were tried and hanged within months after the assassination. Different standards?

You have written in a beautifulway.
I feel gr8 on what you have mentioned in your blog.
You are marvouleous.