The little cork stopper that plugs your favorite wine bottle is intimately associated with it. Some of us even have our favorite wine corks, or have a little cork collection graffiti on the wall, or even use them for growing orchids! Cork is a supremely versatile material that’s nice and elastic, and also almost completely impermeable, so it’s perfect for wine bottle stoppers.

Somewhere during a class I was taking, a rather interesting (and informal) discussion on pricing wines for a market came up. And the discussion here was based on wines with plastic or cork stoppers.

Sacrilege! You scream. Only cheap wines have plastic stoppers. Any real wine worth it’s price has a nice cork stopper.

And then you’ll justify it by saying “wine with a plastic stopper doesn’t taste right”.

But then, is that because the plastic stopper spoils the wine, or is it because of what we, the “market” are ready for? Could other economic lobbies be influencing this as well? 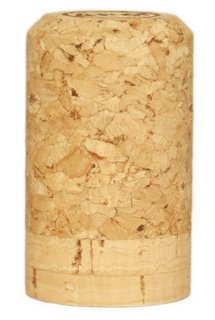 What are cork’s advantages or disadvantages? It’s very environmentally friendly to use cork (the same trees are harvested of their bark once every ten years). The cork looks rather nice on the bottle. It is elastic and waterproof, and fire resistant as well. Wine making has become used to the cork, and so the wines made account for it, and mature well with cork stoppers. But its major disadvantages are that its supply is inelastic (trees can only be harvested once every ten years), a crop failure would cause havoc for cork (and the wine industry) for the next decade, some cork (especially the cheaper ones) can cause cork taint in the wines (ruining the smell). Also, almost all the world’s cork grows in Portugal and Spain (which make decent but not spectacular wines) while the best wines are made in France, Italy, America (California and Washington), Chile, Australia and South Africa.

So clearly, there’s plenty of economic incentive to make wine bottle stoppers out of plastic or some other synthetic material. And obviously, this has been thought of by plenty of people other than me, because a good number of wines now come with a plastic stopper.

But, in the States, and Europe as well (the world’s major wine consuming regions), plastic (or other synthetic) stoppers are associated with cheap wines.

As much as I like cork wine stoppers, do think that synthetic stoppers are more convenient. Quite a few of the New World wines do come with these stoppers nowadays. The European wines are slowly catching on - though it will be another century before the French adopt it, I have seen a couple of good temparnillos from Spain with synthetic stoppers.

Interestng topic..how do you choose them...I actually havent ever seen a plastic stopper. The idea seems strange to me, possiby because I havent seen one before. On occasion, when I havent found an opener, I have been guilty of pushing the cork in and pourng wine into the glass over it - Now I doubt you would want to do that with plastic, would you :)

I drink week end(not necessarily cheap)cépage wines with synthetic stoppers;they are convenient , you can't break them while opening.
In France a big discussion is going on on the relative merits of cork vs. synthetic stoppers.Some opine that the "gout de bouchon" , in fact, cannot be ascribed to the cork stoppers ;other factors of making the wine would also be at stake.So it may take a few decades before you find bottles of Latour or Margaux with synthetic ones.
Pardeshi

Veena....yes.....a lot of the Australian wines (which are darn good, for the price) are in synthetic stoppers. I don't mind them. But i don't see them in the "premium wines" segment (though ofcourse i don't buy them, but welcome them as gifts :-)). The French would probably die before they adopt it, but still, the "gold standard" for wines remain the premium French. The market might force them to adapt though...

Pardeshi.....if you find some of those French discussions in blogs/news sources, send it to me! Should be fun reading.

Hi Sunil
I see a lot of wines now with the plastic stoppers. I feel that is the wave of the future.

My boss believes the future is in box wines. These come in a bag and they have a spigot. They are perfect for people who don't drink much wine because once you pop the cork, the quality of the wine drops with time very rapidly.

Box wines....hmm.......there has to be some research that needs to be done for that, to make sure that the wine "ages" well inside a box.

There is actually a company* here in california that markets premium wines both in jugs and in boxes. Both of these are of course herasies to the snobby wine gods but they taste great and cost much less. As far as plastic corks my favorite** wine uses them and I enjoy it thouroughly.

Troy, that's great. i would totally buy wine in a jug. And those links are excellent..........their products need to be tried, and soon.