A long time ago, Disney studio’s crafted masterpieces with paper and pen, and immortal movies like Bambi, Beauty and the beast, Aladdin, or The lion king were born. But Pixar came along, and changed the world of animation for ever with their brilliant computer-generated movies. Pocohontas was passé, while Nemo was all the rage.

But in Eastern lands far away, paper-and-pen still ruled, and computers were continued to be used just to embellish art. This was Japan, the land of anime. And Hayao Miyazaki was one of the darling princes in this fantastic world. 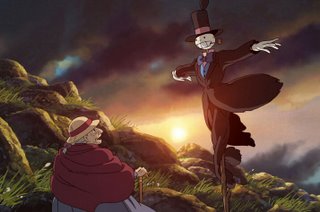 From the ever-excellent Ghibli Studios comes yet another Miyazaki creation, Howl’s moving castle. This is the story of a young, helpful but shy girl, Sofie, who, due to a chance encounter is transformed in to an old hag by the Witch of the Waste. She then sets out on an adventure to reverse the spell, which takes her to a mysterious moving castle where a powerful wizard called Howl lives. And then she transforms his life, as he transforms hers.

Or is it the story of Howl, a powerful wizard scared of his own power and responsibility? A wizard who refuses the summons of the king who wants him to fight with his armies? Howl runs away, creating a magical moving castle which goes from place to place, escaping the king’s men. And in this he is aided, and magically connected to a fire demon, Calcifer, and with him is his young apprentice. Amidst these plots are little subplots of a magical scarecrow aiding Sophie, or the king, his councilor-witch, and their armies, or the Witch of the Waste.

There are innumerable little plots weaving in and out, something that will almost certainly confuse kids who watch this movie. But there’s something here for everyone. In some ways this is Miyazaki’s most complex story. Here, there aren’t any good or evil characters (except perhaps Sofie, who is so incredibly optimistic and likeable), and every one is muddling through their lives, trying to figure things out. There are deep uncertainties, desires and emotions that lie within all people.

Amd Miyazaki’s world is a world of spectacular magic (both literal and figurative). The towns are both medieval and futuristic. The lands are colorful, dark and yet bright. The creatures incredible, yet lovable. And the visual spectacle is magical. Miyazaki himself, through his movies, is going on a journey. Kiki’s delivery service was a bubbling movie that even the youngest of kids would enjoy, simple, straightforward, and thoroughly entertaining. His later movies took on many shades, with a little in it for every one, young and old alike. The fantastic Princess Mononoke and the dune like Naussica, valley of the winds, amidst their Gods, and demons and creatures and men, had a strong message of living in harmony with nature, and the futility of war. Here, it’s a bit of every thing. Howl, drawn like the classic anime hero, is hardly the assured, self-confident, cocky hero many typical heroes are.

The movie may be a little confusing to first time Miyazaki viewers, but it is meant to be enjoyed in all its little pieces, taking in one sub-plot at a time. The ending is nice, but not sufficiently Miyazaki. Some classic stylistic effects (like Sofie looking different, depending on how she’s feeling, or whom she’s with) might confuse at first, but soon will grow on you. And every moment is one of visual spectacle, colorful, rich and detailed. It is the work of a skilled master storyteller, who loves the magic in his art, not his best, but still superior to any other mere animation around.
Posted by Sunil at 3/26/2006 09:39:00 AM

I've never seen anything by him, but your post definitely makes me want to...Would be great if you could profile any other such non-disney creators...

Certainly Apu......i do often write about movies that are wonderful, and foreign (not English, or Indian).....

Miyazaki's movies are beautiful to watch, and very entertaining. Some superb anime, with long, deep storylines....

I think I am going to see the movie as soon as I can lay my hands on it. Btw did you know pixar and disney have merged and the new company is called Dixar :-)

anindita....thanks! And do visit often!

Sudhanshu......actually, Disney and Pixar have had a partnership for many years.....and it had gone sour some months back, but much of that too is now history, and they've patched up. Anyway, "Dixar" is still a rumor.....and the two will retain their independent names, and productions :-)

I'm pretty sure you'll enjoy Miyazaki though....and if you do, there's a treasure-trove for you tovisit.

Recently someone gave me a Japanese animation movie (a large AVI file) and the detail really blew me off. I cannot recall the name of the movie at this moment, but they even pour water into the handpump before using it -- we used to do this at my grandparents' place.

I think too much computer animation takes away the charm and makes it a bit realistic. We see animation movies because we want to see animation movies. The old Mickey Mouse and Tom and Jerry are still my favorite. Oh! I even remember Woody Wood Pecker and Secret Squirrel.

Amrit....yes....sometimes the detail in anime and animation is astounding. But it's not only the paper-pen stuff that's amazing, some Pixar animations are just as spectacular (Finding Nemo remains a favorite for superb underwater detail). I think there can be charm in both......but some artistry, and (dare i say it) flaws in the old-school artwork sometimes makes it all the more fascinating.

I have not watched his 'howls moving castle' ; but, watched others ones like 'Spirited Away' and 'Princess Mononoke'.

Extremely well made and the various nuances and sub-plots and deviations from the movie make it an amazing experience.


Thanks for the reco - I will definitely pick up 'howls moving castle'.

btw, I heard that he is making a movie on ursula le guin's 'earthsea' series. that would be also an interesting one to look forward too..

that kind of fantasy is perfect for specacular "magic" and plenty of harmony-with-nature and futility-of-war kind of movies......it should be good.


Howl's (to me) wasn't nearly as good as Spirited away, or Mononoke.....but is still very good. You'll enjoy it for sure.

Btw does anyone know where in bangalore can I get hold of these movies?

it's going to be hard to find miyazaki movies. There used to be a video library in Jayanagar called "Jacks/Channel 9" which used to have some "less common" movies......could try that.

I don't know about the new libraries....but i hear there are good ones in Koromangala.

But i'm sure you can buy the dvds on amazon and suchlike.....they're worth it, if you like splurging (buy them used, they cost around $6-9).