The cost of arms, legs or life itself

Polio is one of the nastiest diseases humans have known. It’s a highly infectious and devastating disease caused by a virus, poliovirus, and most severely affects children. A number of infected patients develop severe, irreversible paralysis, and a few of them even die due to the paralysis. But many of those who survive live extremely traumatic lives under severe physical paralysis. The virus enters the body through the mouth, and multiplies in the intestine, and is constantly emitted through feces, from where it spreads across communities.

It remains a major problem in 9 countries. What’s common between them all? Extremely high populations living in relatively squalid conditions, in extreme poverty. And the sub-continent, especially India and Bangladesh, remain at the very heart of the disease.

The New York Times has a rather extensive article on the disease. 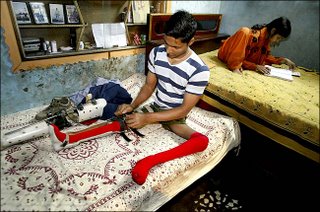 ……Nearly 18 years ago, in what they described as a "gift from the 20th century to the 21st," public health officials and volunteers around the world committed themselves to eliminating polio from the planet by the year 2000. Since then, some two billion children have been vaccinated, cutting incidence of the disease more than 99 percent and saving some five million from paralysis or death, the World Health Organization estimates.
But six years past the deadline, even optimists warn that total eradication is far from assured. The drive against polio threatens to become a costly display of all that can conspire against even the most ambitious efforts to eliminate a disease: cultural suspicions, logistical nightmares, competition for resources from many other afflictions, and simple exhaustion. So monumental is the challenge, in fact, that only one disease has ever been eradicated — smallpox. As the polio campaign has shown, even the miracle of discovering a vaccine is not enough…….
…………….Teams like the one that faced scorn in squalid warrens of Bareilly have made repeated sweeps in the state of Uttar Pradesh, home to 180 million people, which Dr. Cochi of the Centers for Disease Control describes as "historically the center of the universe for the polio virus." (bold fonts, my own).

In case someone reading this thinks it’s the NYTs usual case of India-paranoia, hold your horses. It’s all true, and it remains a great shame that India (like all other affected countries. From what I’ve seen (and heard about, from health-care workers), there’s little journalistic hype in this article.
Dig through the mountain of data a little deeper, and you notice that the countries on the list of most affected countries are Nigeria (by far the worst), Yemen, Indonesia, Somalia, India, Pakistan (here’s the full list), all Islamic countries. And in India, almost all the polio cases have come from Uttar Pradesh and Bihar’s slums, in Muslim dominated areas.

I’ve known a few health-care workers in India who worked (and still work) incredibly hard over the years fighting polio. Their job is thankless, and relentless, walking from house to house in slums, banging on doors and begging, pleading, cajoling or scolding parents to inoculate their kids against polio. Often, they feel they are talking to impregnable walls, that respond only by hurling abuse, or with stony silence. The minds of too many people (especially Muslims) in these slums have been brainwashed completely, often by religious "leaders".

".........."Please open up," pleaded one polio volunteer, Firoza Rafiq, outside the locked door in Bareilly during a drive last year. "We won't force you." The woman inside first shouted through a crack that she had no children, though a little girl had just scampered in....."

It's impossible to understate how well problems in these slums have been captured by that one line above. Years ago, I was part of a group taking a census in a slum (this one's in Bangalore, near Wilson Gardens), for a DPT/Measles/Polio vaccine drive. We'd knock on the door of a house, show our credentials, and ask how many kids were in the house, and if any one was pregnant (and if so, was receiving proper medical attention). It's amazing how often we heard answers that were blatantly false. There would be three kids clutching to a women who's obviously their mother, and who's obviously pregnant as well, while their father would, with a perfect poker face, say that they had just one kid, and that no one was pregnant in the house. Exaspereated, we'd ask about the other kids, and the father would say they were the neighbors, and just at that time, one of the (smaller) kids would rush up to him calling him "appa/abbu"! These are the kinds of odds faced by health workers in Indian slums.

It’s surprising how many people believe that the polio drops are not vaccines, but drops given (especially) to girls to make them sterile and incapable of having children. Other equally powerful rumors float around that these pills make boys impotent, and meek, and will make them servile. Yet other rumors insist that this is a western ploy to destroy Islam. And a lot of these rumors come from local religious leaders, who insist that this is a targeted government campaign to wipe out muslims. And why can’t these people learn from other muslim countries like Egypt or even the extremely poor Bangladesh, where very promising strides have been taken towards polio eradication?

What do they get out of it? Why were there riots in Nigeria during polio campaigns, where some health-workers were even hurt? HTF do people actually believe these rumors? Isn’t it reassuring enough when Amitabh Bachchan or Mohammad Kaif come on ads urging people to take this vaccine?
What will it take to eradicate this disease, when it’s not resources or availability of health-care workers or vaccines that is limiting?

Now we have Pulse Polio programme for last 7 years or so. We give Polio Drops to all the Children below 5 yrs of age.But as you have pointed out there are pockets where children are not given Polio vaccine by their parents.For health workers its easy to give Polio drops to willing children in PP programme.So huge amount is spent in revaccinating children who have almost 100% immunity and those pockets in U.P. and Bihar go unattended. Well you are in US and this is a blog so you can write freely. Here in India its Politically incorrect to imply such things to Muslims.Political class- especially secular parties- have adopted Ostrich's attitude as far as such social problems concerning muslims.Family Planning is also one of them.Bangladesh and Indonesia have better performance than India in these matters-PK

pk.....that's an excellent point you bring up......about revaccinating children who have complete immunity. And you're absolutely right......there's the ostrich like situation here where there's either constant denial by political classes that there is a problem, or extreme fear-mongering, and scaremongering by other groups. It's not a happy situation. As a doctor you know that it's really not hard to treat polio, or diptheria or suchlike.....the resources, material and manpower is all there. And political parties like the SP in UP seem to want things to remain as they are, for their votes.

Bangladesh and Indonesia have much to teach India in these respects.....much more success with immunization, family planning, and basic education amongst muslims there.

Sunil,
I remember seeing an article in some newspaper or magazine regarding this issue. It appears that the problem is not confined to vaccination against polio, but the whole regime of children's vaccinations that are given in India, among these communities. Do you know whether health workers receive the same response w.r.t to other health issues as well?

krishna.....yes, there are pockets where there is a lot of resistance to health workers. Part of the problem is that these pockets have seen so little worthwile work, and so many political promises, that they are extremely suspicious.......

But the fact that polio still exists in the world is a terrible shame. It can so easily be eradicated...

Its funny how religious tensions and insecurities trickle down and affect aspects of Indian life one would usually not associate with religion at all. But I feel your passion and frustration and yes, it is frustrating. On the one hand it makes me feel like going on an anti-religion tirade but the sheer futility of doing so halts me in my tracks.

Sunil, I think it is not just about religious tensions alone.. all kinds of development workers face resistance - thosw who advise on family planning, for instance have a really tough time... and like you have said, there are so many misconceptions and conspiracy theories floating around...

the ads have been pretty regular in the last few years, advising, pleading with, even yelling at people to go get their children immunised against polio... simple line do boond zindagi ke.. but I have no idea how effective these ads have been...

but how does one get past these barrier? I know you have asked the same question... makes one despair...

(been trying to leave a comment - there was some problem - will come back again if I can remember what I wanted to say earlier :))

gawk......it's not just religious tensions....like Charu said, it's a whole bunch of other things. And TV penetration in slums now is pretty decent, so many people have seen the ads, but still there are waaaaay too many problems. But there really needs to be focussed efforts for pockets that are most resistant, and these efforts cant be those of the health worker alone. There needs to be a lot of education and it has to be spearheaded by very dedicated officials. You can be successful if you come up with methods that show some very good early results (that then make the people believe and trust you), and then they'll agree to come to you for things like polio drops, which have no visible short term effects, but obviously save many lives in the long run.