When obstacles are removed

August is a good month (like many other months in India) for holidays. There’s Independence day of course, and usually raksha bandhan and Ganesh Chathurthi both fall in August. Since school usually opened in June (after the summer break) and both June and July were bleak months (as far as holidays went), I would await August’s arrival with eager anticipation. Somehow, this fact, along with the fabulous treats, colorful decorations and a delightful Amar Chitra Katha made Ganesh chaturthi a favorite festival.

My parents would go out a couple of days before Ganesh chaturthi (the day before being Gowri puja) to the market to shop for the festival, and I would invariably tag along. The endless rows of fruit vendors with cartloads of fresh fruit, and the even longer rows of flower sellers, engulfed by the mesmerizing fragrance of flowers would be our first stop. After some haggling and bargaining, our shopping baskets would soon be much heavier. After buying fruit and flowers, the next stop would always be at one of the carts or stalls (that appeared overnight, only to stay for a week or two and disappear) selling clay and paper-mache Ganesha idols. I would gawk at the massive six or eight foot Ganeshas that glared down at me, while dozens of smaller ones (gradually decreasing in size) would be arranged pyramid like, in front of the giant ones. My father would usually buy a small one (six inches would be considered plenty), and for a child some eight years old, that seemed to be a rip-off. A few years later, they stopped buying the garishly painted clay idols completely. Amma would say that it seemed to be wasteful and polluting, buying them and then immersing them in a lake. I later learnt that the paint used is rather toxic (the traditional clay ones aren’t though), and also result in silting in many lakes.

The celebration at home itself would be a rather simple affair. Amma and appa would sit and complete their puja (I would usually sit with them too), and after that we would say our own short prayers. The temptation to actually pray would be irresistibly high, since the prayers were to one who could miraculously remove ALL obstacles (Vigneshwaram). So, for what ever it was worth, I would pray (to do well in my studies, or in my single-minded but futile attempts at cricketing excellence, or music, or any thing else). That accomplished, the rest of the day would be one big party. It was also the day of honor for that masterpiece of culinary creation, the kozhukattai. Filled with coconut fried in jaggery, with the soft, melting exterior of steamed rice flour, the very sight of them would make the salivary glands irrationally active. In my prime, a dozen of these would be easily consumed (though alas, age takes its toll, and consuming more than eight in a sitting these days requires a supreme effort). There would be an assortment of savories my mother would make as well, and some special sambhar (usually with baby onions) to boot. A day of gastronomic ecstasy, and post meal recovery! 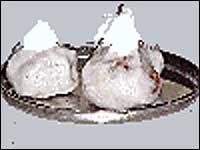 Afternoons (post lunch-recovery) would usually be spent visiting the various Ganesha “pandals” that every street or colony would unfailingly erect. My father would tell me that visiting nine of them on that day (the number would vary and could be five, or seven, or just three) would result in great luck. My own incentive however was different. I would search for the most tastefully decorated or imaginatively decorated pandal. Decorations would range from the simple to the bizarre and exotic. The “big spenders” would decorate their Ganesha with cashew nut, almond and cardamom, while other more typical ones would stick to a colorful arrangement of myriad flowers. Colonies would compete for (unofficial) bragging rights, by hosting a Ganesha larger than any other in their own neighborhood, and by blaring devotional music (usually set to the tune of a popular movie hit, with the lyrics suitably altered to replace more risqué elements with the devotional) a little louder than the next pandal. Usually, the larger the Ganesha in the pandal, the more garish and ostentatious they would look to me, and my vote would go to the one or two simple clay Ganesha’s I would find that were not covered in golden paint, and which were tastefully decorated with a couple of lamps, and strategically placed floral arrangements.

But more importantly, I would visit pandals (often more than the recommended seven or nine) for the prasadam they would each offer. This could be a simple mixture of jaggery and dried coconut, or milk with apples and bananas, or Panchyagajjya , but sometimes the colony would go the whole nine yards, dishing out modakas or kuzhakattais or even Mysore Pak, made in the finest ghee. In my teenage years, I kept up this gluttonous habit, but figured that running around from pandal to pandal would take care of some of those extra calories. There seemed to be an uncanny co-relation with the style of the pandal and the quality of the prasadam, and the aforementioned “tasteful pandals” usually had the most tasty and homely treats to offer.

Ten days from the festival (or the next day itself, depending on convenience) crowds would gather again, for the immersion of the clay Ganeshas, the “Visarjan” festival. This day would usually end up depressing me a little bit, as I would be saddened to see the immersion (of Ganeshas painted with toxic paint) in lakes and tanks, accompanied by callous crowds who would convert the lakes into a dumping yard. Thankfully, awareness in present times have increased, and most temples have separate immersion tanks made just for this purpose, and this has done much to save the city’sdying lakes. This done, the crowds would finally melt away, and I would be left with the desire to recover from the eating (and ready myself for the next round) before Dusshera crept upon me silently in late September or early October.

I agree with Anand. Your writing is evocative and fun. I recently celebrated my first Ganesh Chaturthi... it's nice to hear about it from a different perspective. Cheers!

hey, happy vinayaka chaturtti:)
kozhukattais and sundal. yummm.
interesting what you've said about the garish colored idols. my husband and I were talking about it today. and I have post coming up on that!

Thank you Anand, Vikrum, Charu. Hope you all have a good time in India (Mumbai!) today.....with all the partying.

I'm very interested to learn about Indian culture. I've had a fascination with India since i was a child. I studied some Hindu literature during my BA courses in US, but am recently learning a lot more via blogs and flickr. The kozhukattais sound yummy.

:| you'd to write about ganesh chathurthi and ukadee che modak!

Mustang.....yes....totally. I'm sure you miss the masti from back home.

Nicole, thanks for commenting! I'm really no expert in Indian culture or any thing like that, but do visit some of the links on my blogroll (many of them are Indian bloggers) and you'll find some interesting stories from India. Desipundit is a nice one-stop site for lots of stuff about india (and you can always look at their archives in their travel or culture section).

Lovely post :) A very Happy GAnesh Chaturthi to you and your family !

nice to read about your ganesh chaturthi festivities :) I have missed the last five but that is the cost of staying away from home.

What a lovely post Sunil. Ganesh Utsav means so much to so many people around the world.
So many memories of so many events and preparations.

Sigh, right now that's what they are, only memories!

Hi Sunil
Very nice post.
Happy Ganesh Chaturthi to you and your wife.

Beautiful post and one could visualize the essence of the festival while reading it.

what a great post, sunil. yea, it's wonderful to imagine a god who can remove all obstacles... :)

Ash, Patrix, Minal, Michael, Anshul, Uma......thanks for your wishes, and wish you the same. It really was just another day at work, but when you call home and hear about whats happening, you tend to invariably think of the good times.

Sunil
Invoked some nostalgic images of Ganesh Chaturthi of days long gone by.
Thanks for the excellent writeup.
Sourin

Played Bohemian Rhapsody today and dedicated it to you!

Sourin, Shoefiend, thanks! I made some pournam (but decided that actually making the mavu for the kozhakattai was waaay too much work).

Sujatha.....wow! Thanks! Thrilled to bits. Thats one of the finest songs ever composed.

Enjoyed reading your post, even though the festival is over.
"(the number would vary and could be five, or seven, or just three) "
Any idea why it has to be an odd number.

actually.....i don't know why it has to be an odd number. My grandma didn't know either......so i need to now hunt for someone with superior knowledge of customs..

Celebrate Ganesh Chaturthi!!! The birthday of Lord Ganesh, the son of Shiva & Parvati. Spread the message of honesty and love through this world on this day when Lord Ganesha ascended on this earth to kill evil. These Ganesha Chaturthi Cards will bring the wonders of life of Ganesha .Send Free Online Greeting Cards to your friends & loved ones. ALL cards are absolutely FREE !!! http://www.desievite.com

Ganesh Chaturthi is the birthday of Lord Ganesh, the son of Shiva & Parvati. Reach out to all your fellow Indians on this auspicious occasion. with these religious greeting cards. Send Free Online Greeting Cards to your friends & loved ones. ALL cards are absolutely FREE !!! http://www.desievite.com/Desi-Indian-ecards.asp

Hi nice blog .I need to post resumes .can anybody send links of that sites.
Thank you.........