Here it is again, your favorite roundup of some of the latest fascinating breakthroughs of Everything Scientific.

Saturn’s giant moon, Titan (perhaps the largest in the solar system, and at least as big as earth) has fascinated many astronomers. In a fascinating research article, researchers McKay and Smith investigate the amount of energy released when various hydrocarbons (acetylene, ethane and some organic solids) are consumed with atmospheric hydrogen. They find that there will be sufficient energy for organisms, like the methanogenic bacteria found on earth, to live just fine. However, organics don’t dissolve too well in methane (so won’t in the sea of methane), but Life can get around this by using catalysts to accelerate biochemical reactions in spite of the low temperatures, and find was to overcome the solubility issue.

So now I guess one of us has to head out to Titan and see if there really is life there.

Mexico remains a predominantly Catholic country. It’s also a poor country, strongly influenced by the US of A. In a superb article in Science, Antonio Lazcano discusses the teaching of evolution in Mexico. Here’s a snippet. 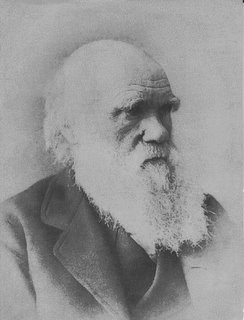 “I am always amused when I am asked by my American colleagues about the problems and pressures they imagine I face in Mexico because of my interest in life's beginnings. However, pressure to include creationism in public pedagogical and research settings has been primarily a phenomenon in the United States. Only twice during my 30 years of teaching about evolutionary biology and research into the origins of life, have I encountered religious-based opposition to my work. In both cases, it came from evangelical zealots from the United States preaching in Mexico. One of the little recognized U.S. imports into Mexico is a small flow of creationists, who, through religion, are trying to impose their fundamentalist beliefs and hinder the teaching of Darwinian evolution in all levels of schooling…………………. It helps here that in Latin America most Catholics tend to read the Old Testament not as the literal truth, but as a depiction of the ways in which divine creation may have taken place. It is thus possible to be a Catholic Bible-reader, or more generally a believer in the supernatural origin of life, without being a card-carrying creationist who has to reject Darwinian evolution in order to maintain logical consistency within a framework of fundamentalist Christian premises.”

Climates are undoubtedly changing (though it’s getting warmer in some places, and cooler in some others). It’s intuitive and obvious that large-scale drought is going to lead to loss of vegetation. But the response of large regional forests to warmer droughts is not too well understood.

In this excellent paper, researchers look at the effect of the recent drought (2000-2003) in Western North America on pinon trees. There was a rapid regional loss of pinon trees here. But it was not due to the heat alone. In dry weather, bark beetles rapidly proliferate, and they grew rapidly in this drought, destroying many overstory trees. Similar such droughts are going to cause major local climate changes, by affecting the vegetation, and therefore soil erosion, near-ground solar radiation, local temperatures, ground water levels, produce (in this case, pine nuts, which are a source of food for birds, mammals and are eaten by people as well). This kind of interrelationships between species are often forgotten by us, since we are “distant” from our environments. But it does affect us all, air-conditioning or not. (PNAS, October 18, 2005,vol. 102, no. 42, 15144-15148).

One of the keys to tracing the origin of Europe’s population is how farming spread across Europe. Archeological evidence shows that farming came to Greece and south-eastern Europe through the near east, and spread across. The LBK people are believed to be the first farmers known to occupy Europe, originating in Hungary or thereabouts, and spreading across the continent. But did the farmers themselves move across the continent in a large-scale migration, or was it just cultural diffusion? These are two hotly contested theories. 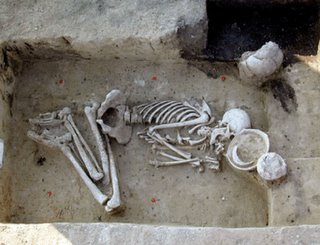 Some of this answer was found in the genes of LBK skeletons that have been unearthed. We all know of the X and Y chromosomes. Now, the Y chromosomes are inherited by males, without change. On the other hand, there is also something called mitochondrial DNA, and this is transmitted down through women. Recent studies with LBK mitochondrial DNA clearly show that the LBK mitochondrial DNA is predominantly different from the mitochondrial DNA of most modern Europeans. This is clearly a little bit of evidence in support of the cultural diffusion model. But earlier Y chromosome results show almost the opposite (the Y chromosome data show predominantly LBK types!). It seems more likely now that colonizing LBK men married local hunter-gatherer women, and it does seem like it was a mixture of both cultural diffusion and large-scale migration. (Science 11 November 2005: 1016-1018).

Fossil fuels are becoming pricier, remain polluting, damage the environment during extraction, and their reserves are slowly depleting. However, biodiesel is an available cleaner-burning fuel, and is made by transesterification of common vegetable oils, and is a perfectly renewable resource. The only problem is that their catalysts are very expensive, are not “green” in any way, and consume a lot of energy. Some researchers (unsurprisingly Japanese) seem to have come up with a possible solution. They synthesize catalysts made from simple and commonly available sugars and is made out of sulphonated amorphous carbon. Making things super-nice is the fact that these catalysts are recyclable (or is that a corollary of the definition of catalyst) and is more efficient than other solid catalysts so far tested. (Nature 438, 178, 10 November 2005)

Finally, for a bit of fun, I’ll leave you with a scan of one of the earliest superman comics (by Jerry Siegel and Joe Shuster, 1939), explaining the science behind the man of steel’s amazing powers (open image in new window for bigger image). 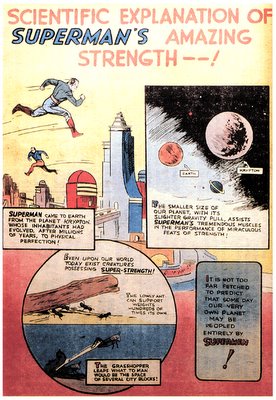 very cool concept sunil! how do u pick the stories out of the deluge out there, i notice it's a mix of scientific areas... any themed volumes in the near future? :)

D. Balasubramanian has a nice piece in the latest Sci/Tech supplement in the Hindu here; His piece is about how an analysis of the Gypsies' genetic makeup was used to assert that the Gypsies were originally from the Gangetic plains. Perhaps it is worth commenting on.

This old post by Cosma Shalizi is not only interesting [scroll down to September 27, 2004], it also debunks some juicy take on the available experimental evidence. A must read!

Nice collection of posts, Sunil. We (in India) studied evolutionary biology too without mixing/messing it up with our religious beliefs. Wonder why Americans are not able to do that?!

There's been quite a bit of talk about bio fuels in the press here too since it looks like the country won't be meeting it's set targets in reducing carbon emissions. I also saw this very interesting segment on the news about the threat global warming has on Polar bears in Alaska. Global warming has been attributed to an early melt down of ice which is crucial for the bears to hunt seal pups. Hungry, the bears wander in to nearby towns and villages and come in to conflict with humans.
Makes me wonder if the damage we have done to the plant is reversible.

Btw your post is as always very interesting. loved the Superman comic strip too!

Mitokondrion......yes, perhaps a themed volume in the future! Feel free to suggest themes that interest you.

Usually, my picks are from Science, Nature or PNAS or Cell....journals that I at least scan through completely, and read all the editorials and reviews in. If i find a really interesting story, i mark it for Everything Scientific!

Abi...thanks. Unfortunately, your link to Dr. Balu's piece isn't alive.......but i looked up the sci-tec article, and it's excellent. The Y chromosome almost definitely points to a Gangetic origin, but the M chromosome seems more widespread across central asia. Looks like the men predominantly migrated (wiht some women) from the gangetic plains......but married women across central Asia. Fascinating.....

Sowmya......i wouldn't generalize it as Americans......i would say some americans. By far a vast majority of the best evolutionary biologists research in the United States, and many college programs in evolutionary biology are just exceptional. And all researchers in the greater bio-medical sciences have a good understanding of evolution (good enough to read papers and popular science articles....like I do :-))

Shoefiend....climate changes have been most dramatically seen in Arctic regions, with a huge increase in "temperate" plant species now happily growing in the poles. The world is changing..........but in a strange way, it's a part of something that's always happened on Earth, which has constantly changed. Except that this time we are agents altering that change.

I love superman comics. They're not quite Batman....but still super :-)

Hi Sunil
Once again, a very nice collection of interesting science bits. I read a book last year about the spread of humans and how scientist are following the genes - especially the Y chromosome. I had the feeling that it was likely that the men spread and intermarried with the locals. When the Spanish came to the New World, the intermarried with the locals - I think that is quite likely.

more often than not.....that would be true. But with nomadic early humans, they often migrated in large groups (men and women), so both theories are equally valid. But yes....the Y chromosome is very useful in tracking male genes, while the mitochondrial DNA hels to identify genes from the mother. So, a tremendous amount of information can be found out from them.

An aside...but i do recomend "Guns, germs and steel" (Jared Diamond.....who's an excellent writer AND an extremely accomplished scientist..a rare combination).

Great collection - I'd just point out that Titan is not the largest satellite (Ganymede is), and is smaller than Earth or even Mars.

Titan's giant atmosphere confused some astronomers into thinking it was bigger than Ganymede, but that was cleared up years ago.

Brian....you're absolutely right. Titan is smaller than Mars! My mistake......

And yes...Ganymede is larger too. Thanks :-)

Buy Indian Books on all subjects from all major publishers of India.It is the perfect place for online book shopping.