If you decide to go beyond Orissa's obvious poverty, it is easily amongst India's most fascinating states (and every state is so fascinating!). We continue with the second and final post of some nuggets from travel in Orissa from a couple of years ago (you can read the first part here). 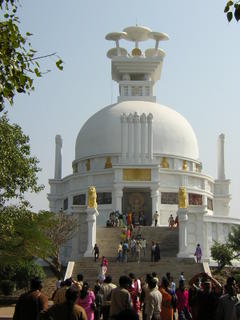 Speaking of Emperor Ashoka, this rather garish stupa is situated on Dauli hill overlooking, the Daya ("compassion") river. The stupa (called "Shanti stupa" or Stupa of peace) was built a few decades ago. Legend has it that the Daya river turned red with the blood of the Kalinga warriors, who died without surrendering to Ashoka's invading armies. Seeing this carnage, the monarch renounced war, and became Buddhist. Near the foot of the hill is one of his carved-rock edicts proclaiming peace, and lasting for posterity. From the hill, you can see miles of Orissa countryside, with a grid of tiny fields spreading across the horizon. The fields look much smaller than those you see in neighboring Andhra, and you can easily see how impossible it must be for a farmer who's entire holding is this tiny plot of land (some smaller than a 2400 square foot suburban housing plot) to survive.

My parents and I were eating at the restaurant of the resort we were staying in. It was off-season, and there were only a couple of other tables occupied, so the waiters were cheerful and relaxed. We started a conversation with this pleasant waiter, who (like many other Oriyas we met) was quite happy to start a conversation. This lead to that, and soon my mother was asking him about typical marriage expenses in Orissa.

He said, "Umm......usually for typical middle class families like ours, a wedding banquet and celebrations would easily come up to 2 or 3 lakh rupees. Sometimes it's much more" (I lakh= 100,000)

Notice, he clearly thought of himself (earning around 6000 rupees a month, including tips) as solidly middle class, and he was right. Though many of us consider ourselves "middle class", we really are in the top 10% of the economic strata of Indian society, and he really was the middle-class! But middle class in India is definitely a mind-set, not an income bracket.

More strikingly, his statement showed how much people tend to spend in weddings. Three lakhs was five times his entire annual income. Imagine someone earning $70000 a year spending $300,000 for a wedding! Given this fact, it is easy to see why people start saving the moment their child is born, and why families go into debt or bankruptcy due to a wedding!

This wonderful waiter also complimented me on my Hindi. Given that these words were coming from an Oriya with an impossible accent and a complete confusion of gender usage (mixing up का and कि), I felt depressed. 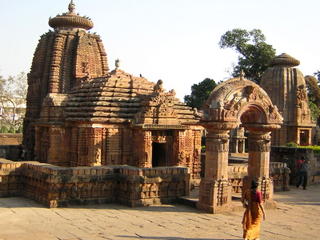 We were at the Mukteshwar (Shiva) temple in Bhubaneshwar. This temple is much smaller than the Lingaraj temple, but you are blown away by the sheer beauty of the exquisite carvings and architecture.

I was standing and admiring a little Ganesha carved on the Eastern wall, when a dhothi clad gentleman (who I later learnt was a pilgrim from UP, on his way to Puri), and his teenaged son approached me. He walked up to me and asked;

I was overwhelmed by acute embarrassment and shame. Mental reminder: the next time I visit temples in India, I'm going to stick to Indian wear.I can't survive this question again. I know the salubrious Pacific Northwest climate does nothing to help my tan, but this is embarrassing. 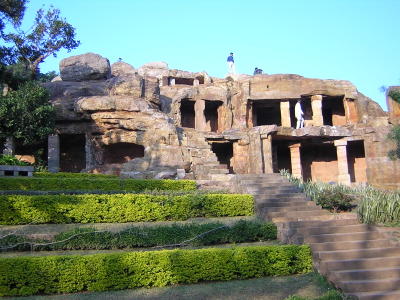 We're at the ancient Jain and Buddhist caves of Khandagiri and Udayagiri. These little cubby-holes were carved into the sandstone by the austere Samanas/Jains, and it's hard to even imagine how a monk could have lived in a hole 6 feet long, 3 feet wide, and 4 feet high. But then, the Jains weren't known to go easy on the austerities. This place is swarming with monkeys; the ubiquitous Hanuman langurs. They were (as usual) fearless since the devout fed them regularly, and one couldn't dream of harming them. Unfortunately, that didn't help me because I was munching away on my peanuts, and they decided that by right it should be theirs. It was theirs in about 2 minutes, the moment I saw them heading my way.

At the base of these hills there were plenty of wonderful roadside food stalls, and tea stalls. My parents and I decided it was high time for a cuppa, and we bought our tea. It was served in disposable plastic cups. I looked around, and didn't find any trash-cans, but plenty of plastic litter on the street. So I asked them if they had some kulhars (little clay-pots) which used to be traditionally used to serve tea. When I had passed Orissa 15 years ago, the only tea that was sold was in these kulhars. You finish the tea, and then toss the clay pot back into the earth where it came from.

The shopkeeper said no one used those "old fashioned things anymore.

I felt a thousand eyes were watching me as I carried our three plastic cups back on to the bus and back to our resort, to trash in to a garbage bin. It was probably in vain anyway. I suspect the resort was just dumping it's trash a few hundred yards from it's walls. 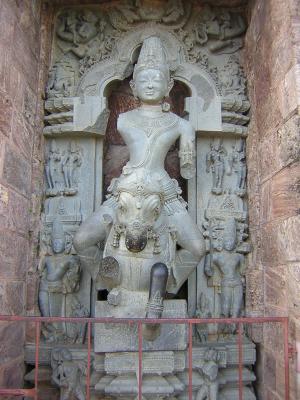 I'll leave you and my Orissa travel memories with this picture of a beautiful sculpture from the Sun Temple.
Posted by Sunil at 7/20/2005 07:48:00 AM

Sunil, I'm glad you mentioned the Ashoka rock edict below that garish stupa. When we stopped to look at the edict, our driver told us that all the tourists rush past up to the stupa! And sure enough, several buses rumbled past us as we explored the edict. Too bad for them, they had no idea what a fascinating slice of history they missed.

And I fully agree with you, Orissa is simply fascinating. Beautiful too. Need to find a way to go back.

Hi Sunil
Again, beautiful photography.
If you weren't getting a Ph.D. I would recommend that you do travel guides. :)

The story of the waiter who was willing to pay the equivalent of 5 years of earnings for a daughter's wedding seems too incredible to believe - but I have heard this story before. I'm sure it is an enormous burden on a family and I would think families would be a bit more sensible about this. Wouldn't it be wiser to spend a little more on the daughter's (or son's) education?

I read a report once that some historian is speculating that Buddha came from Orissa and not from Nepal and that is why Orissa was a Buddhist stronghold at the time when Ashoka invaded. I find it hard to believe no one would have kept track of such a thing, but maybe.

The point was that even Andhra is a very poor state, but I found the land holdings in Orissa even smaller than the tiny ones you see in Andhra!

Michael.....thanks, but perhaps I'll still do some travel guides :-)

I've heard of that theory too.....but it's probably wrong. The buddha's life (unlike the lives of many Indian philosophers) was chronicled extremely well by his disciples, and not only by word of mouth (the traditional Indian way). A lot of India was a Buddhist stronghold during the time of Ashoka.....and Buddhisim was strong even in Southern India, up to the 5th century or so, with people moving between mainstream Hinduism and Buddhisim constantly. Still......I don't know, anything could be true :-)

Hi Sunil, lovely photos and a great post as usual.

Shucks, you sure have a knack for making me all misty-eyed and homesick for a 'home state' that Ive barely lived in ...

The Ashoka stupa looks kind of like a spaceship.

I think the huge amount of money spent on a wedding by Indians is responsible in some measure for the high rates of female foeticide and infanticide in India.

I agree with gawker on wedding expenses.

Thanks for the photos, Sunil. I'll visit Orissa someday.

"I felt a thousand eyes were watching me as I carried our three plastic cups back on to the bus and back to our resort, to trash in to a garbage bin." ...It is comforting to know that I am not alone. I even pick stuff from national parks in the US. I just hate plastic.

I remember good old college days... all those chais and samosas. The samosas used to be served in cups made of leaves. 100% cradle2cradle. Not any more. The Curse of PLASTIC is here to stay

Let me try and attach this image

And pity about the extravagance of our marriages. In Tamilnadu, two highly respected (one could say worshipped) people - the Kanchi Paramacharya and Thanthai Periyar - both strongly advocated simple weddings, but to no avail.

Sunil, you are correct. Southern part of India was a major center of Budhhism and Jainism during 5th and 6th century BC. Old Chinese Buddhist scriptures mention about a Bodhidhrama who went to China from Siyanchi (Vanchi Nadu also known as Thiruvanchi Kkalam – the present Kerala) who brought Mahayana Buddhism into China. He was also an expert in martial arts and yoga. It is believed that Bodhidhrama taught Lankavathara Sutra and Kalarippayattu to the Chinese monks. Likewise it is also believed that the installation ceremony of the statue of Buddha at Nara (752 CE) in Japan was presided over by Bodhisenan, a monk from southern part of India, who arrived in Japan by the special invitation from the emperor. But later Buddhism and Jainism were almost completely wiped out from southern part India. Historians believe that the existing deities in the Shastha temples in Kerala are actually statues of Jain Tirthankaras.

Looking for more travelogues from you.

Gawker, Vishnu...it's quite well documented really, on how huge wedding expenses (remember, in India, the girl's family bears most expenses) may have a large impact on femal foeticide and a preferance for boy children.

One more reason......it saddens me to see tons of plastic litter all around India. The level of plastic awareness is very low, and old fashioned habits like taking a grocery bag (i still do, here in the States) are dying in India.

Srikanth.....true, but some customs are hard to kill.

Madhu....Bodhidharma is believed (by some legends) to have taken kalari to China, which later helped develop kung fu.

Jainism's capital was probably Karnataka (and southern maharashtra) during the chalukyas and rashtrakutas (who patronized both jainism and hinduism). Buddhism thrived in Tamil Nadu and Kerala, and some very nice perspectives are seen in Kalki's historical Tamil novels (shivagamin sapadam, ponniyin selvan, parthiban kanavu etc).

There really is such an overwhelming amount of history in India....it's wonderful.

Interesting travelogue..
I agree with you completely Indian History sure is overwhelmingly immense and magnificent..

I just wanted to let you know that I've enjoyed your articles and photos on Orissa. I've been wanting to go there for a while now, and after reading your evocative articles, it's a question of "when" not "if".

Vikrum.....Orissa, like most Indian states is fascinating. Sometimes, the poverty in the countryside can be a little depressing, but there is so much vibrancy in life here....it is wonderful to look at.

Guess I can turn to your site often for knowledge of some history! Thanks. :-)

I liked the photo of that magnificent sculpture the most; it is unusually 3d for an Indian temple decoriative figure. Wonder who is represented here - probably NOT Surya, for he has a proper chariot, right? Is it Kalki, by any chance, or...?