Rising out of the earth, and defiling the sacred

A little bit of history first. A magnificent ancient city has been unearthed in Chattisgarh, and the sheer scale of the discovery is quite astounding. Outlook writes about the find.

……Sirpur was the capital of the ancient South Kosala kingdom between the 4th and 6th centuries AD. Spread over an area of 25 sq km, the Sirpur archaeological complex is almost four times as big as Nalanda. Lengthwise, the Sirpur site extends almost seven km. In comparison, Bodh Gaya, also in Bihar, is less than three km long……. 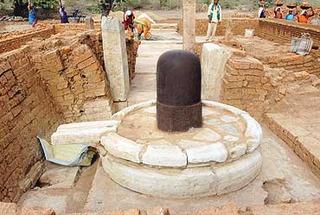 The site also reflects the complex, tolerant, “multi-faith” society that India was, even 1500 years ago. Of course, “Hinduism” was never one single faith; it was and remains a medley of beliefs (though there seem to be too many trouble makers around who want to say otherwise).

……."It's an integrated multi-religious complex," says Indira Mishra, the bureaucrat who heads the task force on Sirpur. The fact that temples of Buddha, Shiva and Vishnu have all been unearthed here indicate a tolerant, harmonious society. The Shivalingas are in four colours—white, red, yellow and black—meant to be worshipped by the Brahmins, Kshatriyas, Vaishyas and the Shudras respectively.

If you have seen the magnificient monuments at Elephanta, imagine something many times that scale!

India seems to have so much history, that most people seem to need to forget some of it in order to learn some more. Sometimes, it amazes me that people continue to build and rebuild so much over the past, that soon the foundation itself is forgotten! This find seems to be another fitting addition to the UNESCO world heritage list.

The second story is an excellent article by former Punjab supercop, K.P.S. Gill (who sometimes writes very well). Appropriately titled “When the sacred is profane”, it is a forceful essay on how we in India are ruining our own rivers. The same rivers that are considered “sacred” to Indians, that were named as Goddesses, and which quench the thirst of what would otherwise be a parched land.

……. It is, perhaps, unique to the contemporary culture of this region that we sully, pollute, deface and defile precisely what and where we worship. The ubiquitous stench and presence of garbage, of open sewers, of ordure and dung in the public street is virtually a hallmark of some of India's 'holiest' cities - including, for instance, Varanasi and Vrindavan. Nowhere in the world does piety cohabit so intimately with unmitigated filth…….

There is more, on how Delhi is ruining the Yamuna (which, against ALL odds, is STILL a “living river”).

…… Instead of helping to restore the purity of this holy river the Swaminarayan sect has chosen to manipulate and bend processes of law, to abuse its influence over particular sections of the political leadership, and exploit its great wealth to grab a large tract of land on the river's bed and flood plain, in order to build a monument to its own unseeing arrogance. But that is only the beginning of the damage it is doing.

In the process, it has justified and set into motion a race to overrun and build on every available acre of the river's banks, with little concern for the ecological impact of such 'development'. Since one major project has already been executed - taking fullest advantage of our false piety and the general disinclination to criticise anything ostensibly connected with religion - it will now prove difficult to resist the many other and potentially disastrous projects that are being planned to consume the river front in a frenzy of so-called 'development'……..

I cannot agree with him more. And then this.

” Barely two per cent of the length of the Yamuna lies within Delhi's confines, but it is here that the river is destroyed. It is widely conceded that the floodplain area is tectonically unstable, ..(snip).., and then sell these off to hapless eventual 'consumers' who will occupy them when the floods and earthquakes come….”

It has become fashionable in India to decry ANYTHING that preserves our environment as “Anti-development”, even if it is obvious that you are shooting yourself in the foot. Development does not mean you destroy the sources of your water, and clean air. These are essential for survival, and we need to do every thing we can to protect this.

There is no need for us to repeat all the mistakes of the West. London almost destroyed the Thames, and then spent millions cleaning it up. Now, it’s a thriving river once more. The same happened with the St. Louis in the US, or the Rhine in Germany. But do we really need to chop our own limb off, and then replace it with an expensive, artificial limb?

Read all about it here.

And, try to read both these stories before Outlook decides to move them to the “subscriber only/archives” section.
Posted by Sunil at 6/30/2005 06:04:00 PM

Sunil, the links are not working - think you need to correct them - but thanks anyway, will read on the outlook site... i was in Varanasi recently and the state of the Ganga - which I have only read about - mde me want to puke - and my field staff were aghast that I refused to even let the water touch me!
and oyur point about 'anti-development' is bang on... we will fell trees, submerge villages, pollute the air, all in the name of development...

Many thanks Charu.....i thnk word managed to do something to mess up the formating, out of some malicious spite.
I usually use wordpad (which doesn't have any internal formating nonsense) but this time I used word, and pay for my crimes :-)

All is well now, and the links work.

Hi Sunil
Interesting post as always.
Sirpur looks like a fascinating find. I would like to visit it someday.
It does seem to be a pattern of development that nations first trash the environment and then later repent and clean it up once they're more developed. India's environment is already in a very precarious state: almost all of the original rainforest is gone. The river are greatly polluted. India will have to check any further deteriation if they want to bring the environment back later once it develops.

Sirpur is news to self; and fascinating enough to contemplate a visit there.

There probably are many more such ruined towns which are barely known to the layman. I would like to mention one Firozabad, near Gulbarga in Karnataka (it is 'only medieval' - about 700 or so years old) that is totally in ruins now - mosques, palaces etc. spread over a few sqkm. along the banks of Bhima river. When I went there a few years back, there were no tourists or anybody about and one could not even see the usual blue board "protected monument...(the usual threats)".

Also interesting to me is the fact that it might have been a Buddhist site that became Hindu after Buddhism subsided. I've heard the same claim (i.e. that they used to be Buddhist) about some famous pilgrimage centers in the south : Sabarimala and Tirupathi.

Nandakumar....that's really interesting. I've visited Bijapur, Gulbarga and Raichur, but have never even heard of Firozabad! Would love to go there on my next trip. Some medieval Islamic architecture is simply magnificient....Fatehpur Sikri for instance.

Ashvin.....that is a theory, but this site is substantially different from sabarimala or tirupathi, where a single site/monument may have transformed over time....it's a city, where all three faiths (Buddhism, shaivism and vaishnavism) have separate monuments. This is typical of many sites....where rulers allowed all these faiths to florish. The Chalukyas are well known to have built temples to all three faiths (as in Elephanta). A number of rulers in Karnataka (Gangas and Hoysalas) allowed Jainism to florish alongside mainstream hinduism. The early Pallavas were Jain (Vishnu Narasimha) but later were Saivite (Mahendra Pallava and Narasimha pallava for example), but built Vaishnavite temples and preserved Jain monuments also. And also continued the "Buddha viharas" of earlier times....

So, there's all these aspects to be understood.

A wonderful find! Hope it does not go the way of Hampi, Konark and other ill-kempt monuments...

If by medley you mean a hodpodge where anything goes- Hinduism is far from it. Even if the term Hinduism is of recent origin the system of thought and practice that goes by the name refers to a well developed and documented intellectual and spiritual tradition that is 1000s of years old. While the several schools of Hinduism as Sanatana Dharma have fought with each other there have been certain basics that they have agreed upon - the Vedas as the eternal conclusion of spiritual and intellectual experience; the nirguna and sarguna nature of the ultimate essence the Brahman; karma; the four purusharthas and many other such principles. Even those faith systems such as Tamizh Saivagamam and Veerashaiva bhakti that do not accord the Vedas primacy; correspond very closely with the various schools of thought in Hinduism. While there is a great diversity of thought with intense debate; there is no doubt among Hindu preceptors as to the basics.

Laxmi Narasu is the first person in our times with his slim tract written about 75 years ago to level the allegation that popular Hindu shrines were built over Buddhist temples. A few motivated and "eminent historians" with no knowledge of Indians languages and culture have parroted these allegations as innuendo. While Narasu used some reasoning that can be engaged with (for instance with respect to Puri Jagannatha) our modern day "progressives" are simply doing a cut and paste of hack literature.

Pennathur.....I didn't (by a medley) mean anything goes. There are certainly certain aspects which all hindu's will more or less agree upon. However, it has always given plenty of freedoms within the faith for different beliefs, and did not try to force a single thought upon people (which was what I might have hinted at in my post).

You are right about Laxmi Narasu's theory being amongst the first, and largely without supporting evidence.
But it is true that the nature of sites have transformed over time (given the way faith naturally evolved in the region), like the Jaggannath shrine you mentioned. It may also be true with Sabari Malai. However, the Tirupathi claim is fairly weak, and almost without evidence, since historical records clearly state the legend of Tirumala since the 4th or 5th century.

Anyway, they diverge from this post, which only talks about a really cool "unearthing", and something I hope to visit before it goes the way of most historical monuments in India.

firozabad is not very well-known. i chanced on the name in a 2 volume book "the monuments of india". even this book devotes but a few lines to the place. and most of what remains of the old city is too badly ruined to really overpower a 'normal' traveler - yes there is a dome, half collapsed and which reminds one of pictures of the townhall(?) in hiroshima. and there is a mosque within the walls of which the villagers grow jowar or something.

alongside bijapur and raichur (i have seen neither and hope to visit both, soon), i could mention bidar too. the architecture of this rather remote town in extreme north karnataka has the feel of isfahan or samarkand (i am quoting, from where i dont remember). recently, bidar used to be significant as a watering hole for hyderabadis during prohibition times.