“If I were asked what education should give, I would say it should offer breadth of view, ease of understanding, tolerance for others, and a background from which the mind can explore in any direction”
-Louis L’amour 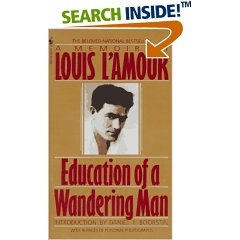 Many people think novels that fall under the “western” genre are rather trivial. To them, all there is to it are a bunch of cowboys, some shoot-outs, some cattle rustling, and a few Mexicans who get shot. The same people also do a great disservice to the genre, and cannot appreciate Clint Eastwood in Unforgiven. But I was drawn to the stories of the West by perhaps the best writer of them all, Louis L’amour.

His books fell in to two groups, the “classical western”, with the cowboys and fights (particularly the fistfights, that were always integral to the climax), and the second, his more detailed historical fictions. In this group are some wonderfully entertaining adventure historical fiction novels like The walking drum, Fair blows the wind, The warrior’s path, Jubal Sackett and many others. What made these books wonderful reading was that through his characters, L’amour painted a wonderfully descriptive picture of the times they occurred. And this, to me, was one of the most enjoyable ways of learning about the history of settlement and expansion in the Americas.

I chanced upon his memoirs, Education of a wandering man at a used bookstore, bought it, and ended up reading it over two days. It turned out to be, like the man himself (at least through his memoir), every bit as “out of the ordinary” as can be expected. In this book, instead of chronicling his life, which is what many writers do in their memoirs, L’amour unexpectedly presents us with an endless laundry list, of all the books he read over his life, sneaking in stories of his life in between lists. And from those stories we get snippets in to America through the depression, and the great war.

And the life was everything but mundane. He grew up in a family that loved to read, and books were a part of his every day life. And at the age of fifteen, he left home to go around the world, doing whatever work he could along the way. He spent many years as a hobo (carefully distinguishing a hobo from a tramp or a vagabond), working along the railroad, and all through those times, all he valued and carried with him were books. He spends time skinning cattle in Texas, and prizefighting across various towns (winning 50 of his 59 fights), and hops on ships as a merchant seaman, and in one incredible story talks of walking across the blazing Mojave desert without water, because he was spending time prospecting an old mine, and his wind-up car breaks down along the way back. Now, that would be true L’amour western style. But amazingly, that story comes as a backdrop, as L’amour describes his readings in the solitude of that mine, and his discovery of a small library there!

Some one telling a story needs to love stories for what they are. That person needs to love to listen to stories as much as s/he loves to write them, and L’amour repeatedly talks about his love for stories. That was his education; books and people. His mind remained ever curious, eager to know what ever it could find. And “old timers” in little towns, whom most people thought were senile, told most of his own stories to him. In between his laundry list, L’amour talks of his passion for writing stories. Though he went on to write over a hundred novels, he started off writing short stories, and most of them were rejected (in the book there’s a nice photo of one of his lists of his own stories, with “rejected” written next to most of them). Here we get a wonderful insight in to the world of publishing, with the top rung magazines, like the New Yorker which were really hard to publish in, and the bottom rung, of small town publishers, who couldn’t pay much. But the money was in pulp paperbacks, a phenomenon, which L’amour observes, revolutionized writing, writers and most importantly, readers, forever.

L’amour also talks of his passion for history, of the ancient world, as well as the west. After all, westerns are a little piece of history, and his love for detail makes him research the smallest aspect of the country he writes about, the peoples, the plants, the mountains. This we see in his novels, which are never “churned out” westerns, where Indians and cowboys shoot it out. Instead it’s a complex mix of grey, of different tribes and their own rivalries or friendships, pioneers, slavers, profiteers, Quakers, and the rest. L’amour appears to be remarkably open constantly to learning of lands and times that are not his own. He reminds readers of history in the west being western-centric, starting in Babylon and moving west to Egypt, Greece and Rome. But there was a world beyond, far East, where great civilizations once rose. And he credits his love for the east to an Arab boy he met when he was on a ship in Indonesia. He asked the Arab what an Arab was doing that far east, and the boy replied that the Arabs were sailing those seas for 500 years. And that lead L’amour to learn of the civilizations of the East, of great ocean expeditions of Chinese navies, of great ports in Tamil Chola country, of civilizations of Cambodia, of history little appreciated in the west. And all this through his collection of books, starting with the Shahnama.

L’amour considered himself an old-fashioned storyteller, a teller of yarns around a campfire. This we see in all his novels and stories. But the memoirs reveal a man who was constantly in search of stories, from history and people. A remarkably open mind, curious to know, and with a desire to learn. And that is the best part of the laundry list of books that become his memoirs. It tells us that there is joy and learning in all written words.
Posted by Sunil at 8/21/2006 08:00:00 PM

"L’amour describes his readings in the solitude of that mine, and his discovery of a small library there!"

Thanks Selva......it was an enjoyable book too!

Lovely, slow, deliberate, ambling review. Am sure L'amour would have been proud. Now we know why L'amour's stories came across as stories, not caricatures:-)

some of my posts do ramble, but that's because I don't like to be in a hurry. When you're telling any story, you got to do it well.

No wonder I enjoy L'amour.

It is often said that one has but one life to live, but that is nonsense. For one who reads, there is no limit to the number of lives that may be lived..."
Louis L'amour

Great review. Finding joy in learning is certainly a gift not to be taken for granted.