A little late, but better than never, I finally got down to reading Joss Whedon’s Vol. 3 of The Astonishing X-Men, with more of the Cyclops-Emma Frost distraction, but more importantly, the description of the cure for the “mutant disease”.

The recent X-Men: The last stand got a little carried away with the special effects, and lost out a little on the superior screenplay the earlier movies had. But it was based on the concept of the “mutant cure vaccine”, and the description of mutants as diseased humans. I just love the quasi-science in the X-men, with a blending of atrocious rot with rather well researched science. There’s an effort to describe mutants and revertants, while flooding the mind with improbable rapid mutations resulting in superpowers. Irregular readers of the comic books though might still remember the female doctor in the movie, who was the scientist behind the mutant cure vaccine.

Shohreh Aghdashloo appeared in a blink-and-you’ll-miss-it role as the Indian doctor, Kavita Rao. The comics do a much better job of fleshing out her character. 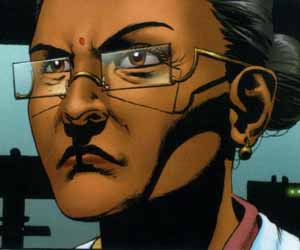 She’s very desi in the comics, clad in sari (with white lab coat, reminding me of labs in India), and a prominent bindi. A colleague respected by my favorite mutant, Dr. Hank McCoy (the Beast), she’s the world’s foremost geneticist, employed by Benetech Corp, and truly believes that mutants are just diseased humans, who need help, and the vaccine will help them lead “normal” lives. But she’s also strongly against the taking of any life, or discrimination. The ethical problems she faces remain in grey areas, and lead to some interesting conversations with the Beast. (Something on the lines of “…so, you think homosexuality is a disease?”, “no, and we could debate the ethics of this endlessly, but homosexuals aren’t a threat to society, mutants have harmed humans.”)

And she’s using the help of super-alien-villain, Ord of Breakworld, who has captive another rather mutant X-man (I won’t be a spoiler here, go read the comic), and has used him to find the cure.

Now, with Virgin comics and Devi, Snakewoman and Ramayana Reborn, there’s a veritable deluge of desi in the comic world. 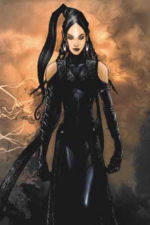 Go read them all.