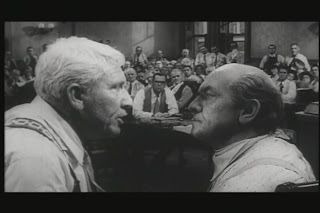 Stanley Kramer made “Inherit the wind” way back in 1960. It is remarkable that the movie remains as relevant and powerful today as it was back then. “Inherit the wind” was an adaptation of a play by the same name that was a parable of the famous Scopes “monkey” trial , and when it was made in 1960 also became a critique of McCarthyism. As the old quote goes, the more things change, the more things remain the same.

“Inherit the wind” was a thinly veiled fictionalization of the Scopes trial, a case in 1925 that tested the Butler act which prohibited the teaching of the theory of evolution, or any theory that denied creation as told in the Bible in schools. John Scopes, a high school teacher in Tennessee, was charged with teaching evolution in schools, and put on trial. It became a battleground between fundamentalists who believed in an absolute and literal version of the bible, and modernists, reformers and thinkers; people like Spencer Tracy’s fictional Henry Drummond (based on the real life Clarence Darrow) who thought that an idea was bigger than any monument man could build.

Watching “Inherit the wind” today, fifty years after it was made; one is struck by both the power of the screenplay and story, as well as the ability of the director to confront a serious issue head on, with no punches spared. The Scopes trial itself was fought by two of the best lawyers and orators in America at that time, three time presidential candidate and staunch Presbyterian, William Jennings Bryan, who prosecuted, and Darrow, who fought for the defense of Scope. In Kramer’s movie, Durrow becomes Spencer Tracy’s Henry Drummond, and Fredric March’s Matthew Brady is strongly based on Bryan. The first few scenes of the movie suggest for a few moments that the characters will all be painted with a broad brush of stereotypes, with Brady entering the town to rousing chants of “some old time religion”. But everything changes once Drummond appears on screen, and the entry into the courtroom. The sheer ferocity of the courtroom drama and the power of each argument make you forget those early moments of awkwardness, and suck you right into the battle. The sequences of incidents in court that lead Drummond to utter frustration in the courtroom are built brilliantly. First Drummond is not allowed to call upon any experts in anatomy or geology, anthropology, archeology or astronomy, with his pleas being dismissed as “irrelevant” to the case. The case was about trying Cates (the character based on Scopes) for teaching evolution, which was against the law. It was as simple as that. Nor was Drummond allowed to read out passages from “The origin of species”, even as Brady proudly declares that he has not read the origin, and has no need to read any work of paganism and the work of Satan. Drummond’s moments of frustration can only be described as masterly. Finally, Drummond has to fight the case using the Bible itself as the sole reference.

Putting Brady on the witness box, Drummond systematically hammers away at passages from the Bible, which if taken literally can only be absurd. If the earth was created in seven days, asks Drummond, and the sun and the moon and stars were only created on the fifth day, then before the fifth “day”, what would a day be? Would it just be a day, or a year, or a million years? To these and other pointed thrusts, Brady remains unperturbed, and only remarks that he did not think about it, because the Bible didn’t talk about it. Drummond leaps upon this point and says that it is precisely the problem, that people here did not think, and the only person who thought about it and talked about it has been put on trial, only for his “right to think”. As Drummond builds his argument, and the single minded fanatism of Brady (and the townsfolk) comes more into prominence, Tracy’s firm, crisp voice almost seems like a thunderous shout as he says fanatism and ignorance always remain busy and need feeding. The entire movie is a masterpiece of courtroom drama, with actors and script rising spectacularly above the merely good to elevate this movie towards true brilliance.

Even between these extended periods of stupendous drama from Drummond and Brady, there are little moments to cherish. When Mrs. Brady is confronted by Rachel Brown, the torn, tormented fiancé of Cates, on why her husband, who Cates trusted and confided in, twisted her words in court to make Cates appear diabolically evil, Mrs. Brady snaps back that at least she believes in her husband, and believes in something, and that makes it her basis for living. What did Rachel believe in? And could she stand for anything at all? In another lull between courtroom storms, Drummond and Brady spend an evening chatting about old times, and Brady asks Drummond why they moved so far apart, and Drummond responds that perhaps Brady had just stood still while he himself had continued to move forward. And while having dinner with Mrs. Brady, Drummond says that he would still perhaps have voted for Brady for president, but if Brady did indeed become president, he would have been his loudest opponent shouting from the opposition bench. The contradictions and complexities of human emotions stand out between, during and within the intense moments in the courtroom.

And then there is Gene Kelly, as the caustic “Baltimore Herald” reporter E.K. Hornbeck, who covers the case, and whose newspaper pays the entire cost of the defense as well as Drummond’s expenses. His character is a throw back to a time when journalists still had names with two initials (are there any left today other than A.O. Scott?), who fought with their words as if they were bare-knuckled fighters, who confronted issues head on, and cowered before no one. Cynical, terse and sarcastic. In a last scene with Drummond, Drummond snaps back at Hornbeck’s cynicism, saying he would die alone, and that no body would mourn for him or appear at his funeral. Hornbeck smiles and says he knows that even if no one came, Drummond would be there, and would fight to the last for his right to be alone. The right to think, the right to speak, the right to question authority, and to stand for the truth. All powerful ideas, yet ideas that have shaped this nation unlike any others.

In the very last scene, we are left with Drummond picking up his copy of “The origin of species”, and then the Bible, smiling, and clasping them together. What does he mean by that? Is it a reconciliation or a preparation for battles to come?
Posted by Sunil at 2/20/2010 12:09:00 PM

Please help save my life. Pls read http://truthbottle.blogspot.com for all detailed information of this country wide chase by bangalore police and real estate gangster network!!

This is not a joke! Read my above blog for this ghastly expose!! I will be killed in a few days which is inevitavble but you still have this to know who did it!

Drummond scientific said...
This comment has been removed by a blog administrator.
3:32 AM

Anonymous said...
This comment has been removed by a blog administrator.
6:41 PM