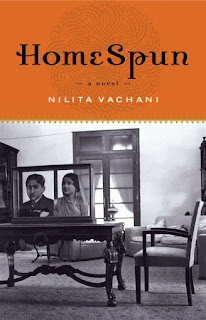 It is hard to resist the lure of a sepia tinted book cover with a black and white photograph of a couple with that glazed, nostalgic look on their eyes. The cover almost suggested something vintage, perhaps timeless. That was more than enough for me to start reading HomeSpun, by the debutante novelist Nilita Vachani.

The book starts with the death of Nanaji, and a scene of mourning. And just like that, you plunge into the lives of different families, and a story of different ideologies, of conflict and reconciliation, love, relationships, marriage and death, all narrated by Sweta Kalra, while the characters slowly emerge as the chapters roll on. Parallel stories develop, all of which you know are interconnected through Sweta. And while the book starts with tragedy, and has plenty of tragedy within, it takes us for a ride without plunging into darkness or depression.

The book is part coming of age, part exploring the complexities of human relationships, part conflict, and part exploring the idiosyncrasies of human nature. There is the story of Nanaji, and his struggles as a revolutionary and freedom fighter fighting against the British for an independent India. He tries to live an extremely principled life, following the idealistic example set by Mahatma Gandhi. The problems of the world and day-to-day life remain somehow esoteric to his mind. Yet his wife, Naneeji, is a polar opposite. She loves her jewellery and silk, and she wants herself and their kids to lead a good, comfortable life, the life she believes that a senior government official (which is what Nanaji becomes after independence) should live. Their lives are spent in open conflict, sometimes bitter, sometimes petty. You know their every relationship is strained. Yet the book starts off with Naneeji wailing and bemoaning the loss of her “wonderful” husband.

Then there is the story of the Kalras, most importantly Ranjit “Ronu” Kalra. His father is a sub-inspector of police. Sub-inspector (later superintendent) Kalra could be described with clichés like conscientious, simple, earthy. The apple of inspector Kalra and his wife’s eyes is their son, Ranjit. A chance encounter with a film producer, who happens to adore Ranjit’s curly 5-year old locks, changes Ranjit’s life forever. He goes on to become the greatest child star of the black-and-white era transitioning between silent movies and sound dubbing. And while Ranjit’s brief celluloid career takes off, the author gives us a hilarious and fascinating view of the film (“phillum”) industry of the time, filled with histrionics and glycerine, political sensitivities, charlatans and bigger-than-life characters. Ranjit’s career as India’s favorite kid ends abruptly with him growing up, but his childhood stardom stays with him for life, and in a strange way directs his fate as an adult. In this mix enters Anamika (Anu) Reza, a spirited teenager, Ranjit’s first girlfriend and true love. Their lives entwine, and they go through passion and longing and separation. Both characters are immensely likeable, yet as different as chalk and cheese. Ranjit is almost immediately endearing. He has the burden of having to grow up as a former child star, and yet remains shy and simple. He’s one of those people who may have dreams, yet lives by avoiding conflict, and trying to keep everyone happy, never confronting tradition. Just by being with the fiery, modern and liberal Anu throws him into a cauldron of thoughts and conflicting emotions. When the time comes for him to make his decisions, he is unable to go with his dreams. His father decides his future, and soon Ranjit heads off to join the air force to become a pilot he would never have become on his own. In contrast Anu’s life, just like her, remains turbulent and feisty and fiercely independent, and she lives on her own terms without holding regrets.

In between all these stories is the pivotal subplot of a small but important character, Ranajit’s friend and fellow officer, Dusty, and the war with Pakistan. And then there is Sweta herself, mostly as a frumpy, slightly overweight but bright and curious girl, with usual and atypical growing up problems. There is her relationship with her beloved Nanaji, and Nanaji, or her mother, and most importantly, Anu.

The author, Vachani, takes us through a whole panorama of events and emotions, and the story progresses beautifully through the last days before independence, the turbulent fifties and sixties, and more contemporary India in the seventies or eighties. We start with tragedy and the death of Nanaji, and as the book progresses, the different stories interweave, interspersed with gentle or dramatic twists. “Homespun” is almost a perfect title for the book, the elaborate plot weaves through a post-independence middle/upper middle class India, and the lives of characters you understand and empathize with, or often relate to. And every one of the characters is beautifully developed and utterly believable. In between the characters, the author explores the myths and stories that we hear about the freedom struggle, or the war with Pakistan (through Anu); myths that are almost always rosy. What lies beneath those tales? Who actually won the war? How many people died? And how did they die? My only complaint with the book was the way the relationship of Anu and Sweta develops, and the slightly predictable direction it heads towards. But that is just a minor quibble with what was a thoroughly enjoyable read, and just the kind of story that will make a terrific movie.
Posted by Sunil at 4/30/2008 09:21:00 PM

Sunil,
I know curiosity killed the cat, but how on earth did you manage to get a sneak peek at the novel, which I believe is being released on May 13?

The publisher sent me a copy which I offered to review. No strange happenings there :-)

It looks like you are a movie buff, and frequently blog about movies. These Picture Gallery Widgets would be a great addition to the movie reviews that you write.

To start just go to http://chakpak-widgets.blogspot.com/ Find the widget which you like. Click on Grab this widget and copy-paste the HTML scriptlet to your blog.

We hope you like them. Please send us any feedback on the widgets and help us improve the widgets further.