Be fat, the wonder drug will save you

I’ve often blogged about the fascinating field of calorific restriction leading to longer life spans. Some of the most spectacular work in the field has been from David Sinclair’s group at Harvard (along with work from his former boss, now competitor, Lenny Guarente at MIT), starting with work on the sirtuin (Sir) genes, which are deacetylases credited to causing the increased survival during calorific restriction.

The knowledge that calorific restriction (which is not starvation or malnutrition, but just highly restricted calories, more than 30% less than normal diets) led to a substantially increased lifespan in all organisms from yeast through flies to mammals is quite old now. However, the discovery of the sirtuins by Sinclair really changed the way we looked at the field. Now, we had a molecular target that seemed to control the beneficial effects of calorific restriction. This gene appeared to regulate processes like fat metabolism, glucose and insulin production and cell survival. Not surprisingly, the group started to look for small molecules, drugs, that could increase the activity of Sir genes, and thereby potentially provide the benefits of calorific restriction without actually being on a restricted diet. After all, let’s face it. We’d all love to gorge ourselves like the proverbial pigs, avoid all exercise, but still live healthy, long lives. In earlier studies, Sinclair’s group did find a group of compounds that appeared to do just that; activate Sir genes, and provide the benefits of calorific restriction without the need for a restricted diet.

That study though was in yeast. Sure, it’s all well and good for yeast to live longer, and perhaps brew more beer, but we really care about humans. So, the question was would these compounds work in mammals?

I got to hear Sinclair talk at a department seminar a couple of weeks ago, and heard him talk about just that. It’s one thing reading a paper about a study, and another thing altogether to hear it from the people who found it. The personality, enthusiasm, “humor” and everything else about people make it often more interesting to hear about their work, rather than just reading about it.

David’s talk was excellent, and he had little trouble engaging the (rather large) audience. Their “star” drug, the molecule that worked best in yeast and worms, was resveratrol. They now carried out tests in mice, which were put on a super high fat and calorie diet, and then fed resveratrol. Their goal was to see if resveratrol might result in the mice on a high-calorie diet living as well and as healthily as mice on a normal diet. Effectively, they wanted to see if the mice could gorge themselves and still live well. 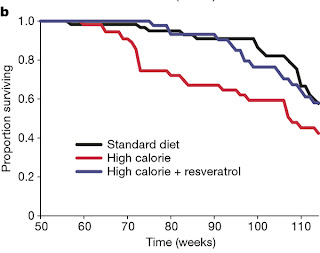 David calls the mice on resveratrol the “Lance Armstrong” mice. Their muscles looked more like the muscles you’d expect on athletes, even though they were rather chunky. In a hilarious video, he showed a short movie where mice fed on a fat rich diet were put on a treadmill. The fat mice struggled to stay on the treadmill. Guess what the resveratrol fed mice did? They practically (and effortlessly) outran the treadmill, to reach the wall and then tried to jump over it.

So, even though the mice on a fat-rich diet became fat (in spite of steady doses of resveratrol) they were super-healthy. Obviously, some of us asked him what happened to normal mice that took resveratrol, and he said they were just superbly fit. What’s more, his company is now carrying out trials for resveratrol (and other drugs developed from resveratrol, that target Sir’s) in people, and the results, in his words “were very, very encouraging”.

The future drug of choice for performance enhancement, anyone?

I thought the whole concept was fantastic, starting from finding an activator for an enzyme (which is much harder than finding an inhibitor) to the fact that it actually worked.

You can read all about it in more detail on the Nature website if you want to.

Postscript: Resveratrol is found naturally in grapes and in wine. But don’t try to drink too much wine, though it might be delicious. You’d need to drink a massive amount of wine to get enough resveratrol to do you any good, and by then you’d probably be dead from cirrhosis of the liver.
Posted by Sunil at 3/10/2007 01:02:00 PM

Hi Sunil
That is an absolutely fascinating study as you said. Does it mean that the beer drinkers of tomorrow would not have to waste monumental amounts of time working out as I had to do all these years in order to stay healthy? Damn, that sucks.

Have you seen the Nature Reviews Drug Discovery article by Sinclair on resveratrol? One problem I see is that it seems to hit everything!

Also, a standard high calories diet still seeme to be the best!

Gawker....even if this does become a commercially available drug (and it will be prescription only, that's my guess), AND you take it, you'll still be a fat bastard with a beer gut. A healthy one, though.

Ashutosh...thanks for the ref. I did read it a while back. What's interesting though is that these guys have a whole bunch of new molecules (which are not structurally like resveratrol) that are much more potent and selective for the Sir's.

As far as hitting everything goes.....some of the trends he showed were very striking. The array data in particular was dramatically the opposite of fat mice. As far as a standard high calorie diet being the best...that will be a matter of opinion. I'm not going to starve though.

What a great post. I recently discovered your blog. I'll be coming back for sure - thanks for making science interesting for the lay person :)

shripriya.....keep visiting. One thing's for sure....science is always fun (and there's plenty in the archives, which you can search through by topic)