An area of science I’ve long been fascinated by is calorific restriction (eating less) resulting in huge increases in lifespan (here are two older posts I’ve written about this topic). But the field is growing in complexity, and has gone beyond just the SIR2 gene that extends lifespan in starving organisms.

The fact that eating less leads to longer lifespan has been well proven. But it would seem radical to imagine that our other senses, particularly our sense of smell could perhaps alter that. Researchers have now found otherwise, and perhaps the smell of food could influence how long we live.

Cynthia Kenyon’s lab first connected smell with increased survival on starvation diets. Initially, they did their study on worms, called C. elegans. Worms, like almost all other organisms (including mammals) live 20- 50% longer than average (when on a normal diet), when they were placed on calorifically restricted diets. These researchers observed that if they destroyed (literally fried) the olfactory system of worms with a laser, the worms also lived longer than normal and resembled worms that were on calorifically restricted diets. This made other researchers wonder if smell and calorific restriction resulted in similar effects. 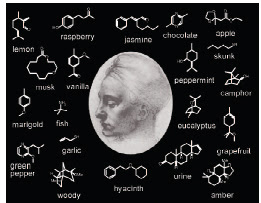 In very recent studies, researchers worked on fruit flies, the ever popular Drosophila melanogaster. Flies too are known to live up to 50% longer when on very low calorie diets. These researchers found that when flies on dietary restriction (which usually live longer than average) were exposed to “tasty” odors (yeast smells, which are clearly yummy to flies); they no longer lived long, but died at near normal, average ages. However, the lifespan of flies on a normal diet did not change when these flies were exposed to these odors. This suggested that just the smell of food could reverse the effect of calorific restriction.

So now, to rigorously prove this theory, these researchers found mutant flies where a specific odorant receptor, which enables these flies to smell, was non-functional. Fantastically, when these flies were kept on a restricted diet (where they should live long), and were now exposed to the yummy food odors, they still continued to have an extended lifespan. What was even more convincing was that when these researchers restored this odorant receptor (by putting back a functional gene into the flies), they could now detect yeast odors, and so died earlier even when on a calorifically restricted diet. In the authors’ own words:

Olfactory-receptor function constrains the beneficial effects of dietary restriction, indicating that consumption is not the only way that nutrient availability modulates longevity.

Of course, this study hasn’t yet been proven in mammals, while calorific restriction has been well proven in many mammals, from mice to monkeys. Still, given that it works in evolutionarily diverse organisms like flies and worms, there is a good likelihood that it might work in mammals, and perhaps us. The authors speculate that if some smells (of food) can decrease lifespan, there must be other smells that might help increase lifespan.

My own take from all of this is that all of this comes from very good evolutionary reasons, all of which lead to reproduction. When times are bad (i.e. when there is too little food), it is probably a bad idea for any organism to reproduce, since it would mean a low chance of survival for the offspring. So, the body kicks in to back-up mechanisms, and goes on to prolong lifespans, till the times are good and the organism can reproduce in times of plenty. The same would hold true for smells of food, which would tell the mind that food is close by and so times are good.

Of course, humans are now so independent of food supply (almost guaranteed a steady supply of food, on a daily basis, and not hunting-gathering) that things must be slowly changing in us as well. Perhaps in a few thousand years more, we would have lost the responses to calorific restriction or smells of food.

Me….. I think I’ll choose the good life, and head out for some beer and fries.

(Next week, I’ll write about newer studies based on calorific restriction leading to longer lives, where researchers have now found drugs that can activate the genes that appear to increase lifespan).
Posted by Sunil at 2/23/2007 07:32:00 PM

Hi. Sorry this comment isn't related to your post. In reply to your question on my blog, you can mail me at witnwisdumb at gmail dot com. I look forward to hearing from ya. :)

Hie,
I know this does not relate to your blog, but I am a furniture design student from University of Central England.

I came aross another of your blog >Volunteer Ramblings. I think you might be able to help me out in my research on the project im working on currently.

I need to know more about the slums/homeless in India. Please email me if you can / know anyone that might beable to help me out. Thank you .

Min Law....I'm just a guest blogger on volunteer thoughts, but Rahul, who runs the blog, has been studying these issues. I'll put you in touch with him.

Sunil,
Very interesting. But I doubt whether this will apply to humans.starvation diet often results in Anorexia Nervosa which is at times fatal.Person may develop suicidal tendencies due to depression.
it will interest you to know that humans can ovulate regularly all through their reproductive life and environmental conditions does not affect ovulation.as you have mentioned all other organisms can control ovulation and reproduction. Humans can't-except when hormones are given.In this matter we have lost out to other organisms and even mammals.---PK

actually, pk, you'll be surprised at what some of the most recent research is showing EVEN in humans. CR does not mean starvation or malnutrition (as I'd pointed out in a previous post). It just means restricting calories to much less than an average diet.
And there's even a society called the calorie restriction society (you can read about ithere).

CR works quite well in monkeys and other primates (where the ovulation cycles resemble humans much more, though that is not necessarily related to CR).......

It's a fascinating field, this.

I hope you are going to talk about Resveratrol :)

Wavefunction said...
This comment has been removed by the author.
8:46 AM

yup.....apart from reading the papers, I just heard David Sinclair give a seminar here, and also got to briefly chat with him, so...i'll blog about what his group has shown and what he thinks...

i think that paper does not show whether the flies are more active when a smell is given than when not. it would make sense that flies expend more energy when they smell that food is close by and try to move around and look for it than when they cannot smell any food around at all.