Welcome to yet another edition of everything scientific, your stop for some latest breakthroughs and interesting findings from the world of science.

Bird flu’s in the headlines again, making it’s presence felt in Europe and now in India as well. The earlier SARS outbreak put China in the spotlight though for collaborative and open international research. China considers itself a world-power, and is flexing it’s economic muscle. But, like the old saying goes, with great power comes greater responsibility. In the global efforts against bird flu, where 1.9 billion dollars were pledged to combat bird-flu in poor nations, China pledged a piddling ten million dollars. It’s excuse was that it needs the resources to combat the flu in China itself. Yet, Chinese efforts to combat the flu at home are shrouded in secrecy, and information or biological samples have not been shared with the rest of the world. China’s neighbors, smaller countries like Vietnam or Cambodia are highly vulnerable to the flu, and will need all the help they can get to combat it. China needs to do with bird flu what it eventually did with SARS. Share samples and genetic data of strains, and provide health officials and biologists any information they have, in order to enable the world to mount a response against this virus. Parsimony and secrecy do little to help.

Malaria has been a human scourge for centuries. It’s caused by a nasty parasitic protozoan, plasmodium, and is transmitted by our friendly neighborhood mosquito. The parasite has multiple life cycle stages, and first enters the human bloodstream as a sporozoite, and makes a beeline towards the liver, where the hide and replicate and come out as merozoites. These merozoites then go on to invade our red blood cells and cause the severe conditions of malaria. But how these parasites move about within the system had never been observed. Never, that is, until now. Researchers (doing some “very, very cool science”) took some plasmodium sporozoites, and engineered them to express a green color (Green fluorescent protein). They then used these to infect hairless mice, so the actual migration of the parasites could be seen in a large, whole animal, and what they saw amazed even them. They sporozoites entered the dermis, and moved forward at a rapid, frenetic pace (faster than any thing they’d seen in cultured parasites, or in the mosquito proboscis). Some of these actually escape the dermis, and encounter lymph vessels. Their two big findings really are that there are new life cycle stages of the parasite inside humans (a skin stage, and a lymph node stage). The other big finding is that the lymph node stage might be important in our own immune responsiveness, and may help our understanding towards a attenuated whole-parasite vaccine for malaria.

Up to about 65 million years ago, the world was ruled by dinosaurs. The first early mammals were tiny, nocturnal, and confined only to land. Only after the dinosaurs became extinct did they get an opportunity to proliferate and evolve to modern mammals. Or so we thought. Some researchers in China have unearthed a spectacular fossil of a new mammal, that’s over 150 million years old, and puts back the mammalian re-conquest of water by at least a 100 million years. This new mammal was a semi-aquatic swimmer, and probably a fish eater. It seems larger than most mammals of that era, and is about half a meter long, with a beaver like tail, and seal like teeth. And the fossil is so incredibly well preserved that it even provides parts of the soft body, like hair or webbed feet. 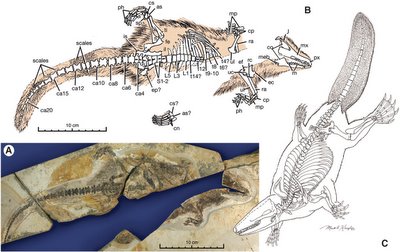 All other early mammals were small, and probably insectivores. This was almost certainly a carnivore, and surprisingly resembles the Australian platypus. Clearly, mammals were around doing their bit long before we thought they were. Good times for researchers of mammalian evolution history.

Thought you knew all about our solar system? Think again. We thought Jupiter, Saturn and Uranus were large planets with a ring system, small moons, large moons and a few outer moons. Uranus supposedly had the most straight forward ring system, with it’s moons named curiously after Shakespearean characters. But the Hubble telescope has revealed more. It has discovered two new moons of Uranus, and two new rings around the planet, R1 and R2! The researchers compared the current orbits of all the moons in a new group with those derived a decade ago, and show that the orbits of the moons are constantly changing, and evolving in a chaotic fashion. All I can say is it’s too bad for new students. The solar system isn’t just going to be one big sun, nine planets, and our moon.

The contributions of evolution to understanding disease and genetics are well known, but it’s full potential in medicine haven’t been realized. Science magazine has a strong editorial on the topic, suggesting that training in evolutionary thinking can help researchers and clinicians ask important questions that they normally wouldn’t think about. Here’s a snippet of their suggestions:

“First, include questions about evolution in medical licensing examinations; this will motivate curriculum committees to incorporate relevant basic science education. Second, ensure evolutionary expertise in agencies that fund biomedical research. Third, incorporate evolution into every relevant high school, undergraduate, and graduate course. These three changes will help clinicians and biomedical researchers understand that both the human body and its pathogens are not perfectly designed machines but evolving biological systems shaped by selection under the constraints of tradeoffs that produce specific compromises and vulnerabilities. Powerful insights from evolutionary biology generate new questions whose answers will help improve human health”

thanks Coturnix....i'd forgotten to add them. I've added them now.....but they're all subscription only....

Hi Sunil,
I always love these.
My son would be fascinated by the platypus-like fossil in China. This is fascinating.

Michael.....i'm glad you enjoy these posts. I enjoy putting them together every now and then.

The fossil's really spectacular. They can even see bits of soft tissues....after 150 million years!! Awesome.

They need to remake Jurassic park now, and have mean swimming mammals too :-)

That was fantastic! The bit about the malarial parasite is very interesting.
" All I can say is it’s too bad for new students. The solar system isn’t just going to be one big sun, nine planets, and our moon ". - imagine doing the solar system model for a science project.

very relevant blog. Sunil, wanted to let you know that I have added this blog in the 14 compilation of Scian Melt.

Sowmya.....the malaria parasite stuff was some very, very cool parasitology research.
And yes......i would fail science class if i had to do a model of the present solar system!

Territorial male....glad you liked it. There are plenty of (what i think are enjoyable) science posts in the archives, under the science post archive in the life categories section. Go trawl them!

Bharath......thanks for the link. i'm saving the melt for this weekend.

It almost sounds as if you would like to purge those from the scientific community who do not accept evolution as a fact.Your position is truely religeous.

For the last bloody time - only a scientific idiot would claim evolution as a fact. It is a theory (unlike ID), one that is one just as sound ground as gravitation, the electron, the atom, and everything else in science. Like the inimitable Richard Feynman, puts it - even the inside of a brick is a theory!

Anonymous......first of all, those were not my words, but those of an editorial i had linked to, and quoted from.

Secondly, as the second anonymous said quite correctly, evolution is a theory, like gravity, the electron, the atom, wave motion, newtonian mechanics.........
The difference between religion and science is that science has a hypothesis, which is constantly tested with new and better experiments. The mounting evidence of experiments one way or the other will create a theory.
Religion is based on dogma, where a statement is made, and one has to accept it with out question or testing.