Growing up in India as a kid, the television was reserved mostly for Saturday evening or Sunday morning entertainment. Those were the glory days of Doordarshan, the state-run TV station that had one (and later, two) channels during the height of socialist repression. That was it. One channel, with a couple of soap operas, a Kannada movie on Saturday, cartoons on Sunday morning, and a Hindi movie on Sunday. By the time cable TV made its appearance and started becoming popular (with Star TV, and some 10 other channels), I was practically through high-school.

Anyway, that’s digressing from the point.

In spite of being the sole channel on television, there surprisingly were a reasonable number of rather decent shows. And in one area, the state-run channel did rather well. They took their role as “educators of the nation” rather seriously, and so there were some very good science shows that we ended up watching. 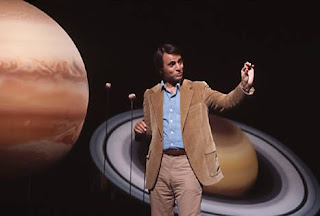 As a kid, the first science show I watched (on the much-abused Doordarshan) was the wonderfully evocative Cosmos. I remember Carl Sagan’s voice, though at that time I had no idea who Sagan was, and probably didn’t even fully comprehend the series. The shoddy state run TV station continued to surprise, broadcasting a number of films from The National Geographic’s enviable collections. On Saturday mornings (I think), a series of films called Expeditions to the animal kingdom were aired, and as a kid, I could name and correctly identify more animal, bird, insect, crustacean or fish species than the rest of my family combined. Then there were the movies from Project tiger, the Indian government’s focused (and at the time successful) effort to save the tiger from extinction due to poaching and habitat loss.

On Saturday afternoons, the Universal Grants Commission (UGC) would air dull, amateur, but very informative documentaries on various topics of science and education. And perhaps the finest science show that was ever aired on Doordarshan remains the always enjoyable Turning point. I would wait with eager anticipation every week for Girish Karnad and Prof Yash Pal to show up and host that show, and watched with rapt attention as the great discoveries of science were unveiled and explained. To me, all those years ago, Prof. Yash Pal seemed like the most astounding mind on the planet. He seemed to know everything, and science as a career option almost seemed irresistible.

I mean, imagine being a fountain of knowledge talking science on TV!

It seems like kids today, thanks to a glut of sports, music, cartoons, entertainment, sitcoms, movies and the like, have less time to watch shows like these (that we “had” to watch, since there was nothing else on TV). It’s a pity. But, as I now continue to watch my favorite show on TV, Nova, I often nostalgically remember those old days, and thank Doordarshan for its science shows.
Posted by Sunil at 3/25/2007 08:25:00 AM

Hey! I had completely forgottent about turning point and then reading you words it all came rushing back!

reading via feed, i had completely missed the new look ! nice !

turning point was indeed such a good program...

Turning Point! How good that you should remind us of that! Unless I am mistaken, Mahesh Bhatt took up hosting that show towards the end.

Prof Yashpal indeed was the nation's hero for budding science buffs. Probably iconic was one question that he got from a reader: would it someday be possible for me to get a brain transplant - so if I got your brain I could be as smart as you?

The Prof clarified that if his brain was placed into someone else's body, the Prof would gain a body, rather than the body gaining a head. "I am what I am in my brain. As for the knowledge that I have, it is all there in the books!"

apu...for some reason, feedburners messed up my feeds. I'm trying to fix it.

Curiouscat....heh, wasn't that a good serial?

Kiran.....i allowed myself to forget the few episodes that Mahesh Bhatt hosted. :-)
But Prof. Yash Pal was and remains a big inspiration for young science buffs. And his response to that question remains classic! I didn't remember that one :-)

What a coincidence that you posted on this theme! Over the past couple of days, I have been watching Carl Sagan interviews and narrations on the internet (check out his short interview with Charlie Rose on Google video), and reading his book "Billions and Billions". Sagan was a great scientist, but an even better communicator of science. And also a great and true humanist. I also thought about Turning Point which was a really good show. I thought that somebody should make a show on biology and chemistry just like Cosmos was about Astronomy and some biology.

Ok, now this is reaaaallllly weird ! I got a rush of posts from your blog on my feedreader, and rushed here thinking that you've been amazingly prolific ! But none of them show here... I don't know if they are old posts are what....

ashutosh.....yes indeed. Sagan was a tremendous inspiration, and played a huge role in popularizing science. It will be great if someone makes or writes something like Cosmos, but for chemistry and biology. Just fantastic.

Apu.....I apologize for feedburners misbehaving. I think it has something to do with the labels that blogger allows. I've been tweaking my labels for older posts, and that seems to have messed up the feedburners. A couple of other people have also told me that. I won't mess with labels for now. :-)

Completely agree with you my friend. Those were glory days of Doordarshan.

Their DD Metro was a great channel. And remember Surabhi on DD National every Sunday i guess at 9pm. It was another great show on Doordarshan those days.