One of the most interesting biology lessons I had in middle/high school was a class about symbiosis. Here, there were some examples of two living organisms co-existing together, usually benefiting each other, but sometimes only one organism benefited. All we learnt was about mutualism (where both organisms benefited), or parasitism (where one benefited at the cost of others). Well, there understandably are regions in between, where only one benefits, with no cost to the other, or where it is disadvantageous to one, but neutral to the other and such like.

In a beautiful paper that’s out in the latest issue of PNAS, I learnt of another one, called phoresy, which is actually a form of commensalisms (ignore the big words, just read on). Phoresy is actually a rather interesting system where one organism uses the other for transportation.

Now, why would an organism want to use another to transport itself? Perhaps because the other is more suited to move distances, or reach food sources that the one piggybacking needs. Like the remora that stick on to sharks. They move rapidly with sharks, and are protected (who’s going to attack jaws?), and get shark leftovers for food. The sharks lose little, so don’t care. It’s a win-no loss situation.

But this recent paper is far more fascinating than just that, and goes to show how far evolution can go to make things work for an organism. There’s a humble beetle called the blister-beetle. This beetle, like all other beetles, starts off as larvae. Now, these larvae actually survive by living off the pollen and nectar in the nests of a particular species of bees.

And how they get to the bees nest turns out to be a tale of stealth, intrigue and ultimate deception. After all, finding and raiding an insect nest on their own (especially for a wriggling larva) can’t be that easy. So they come up with something even better.

Instead of every larva striving for its own survival, the larvae co-operate to ensure their survival (greater good). The larvae first aggregate, to form a cluster, on flowers and branches of plants. Incredibly, this cluster visually resembles a female bee.

The male bee is drawn to this cluster of stealthy larvae, and tries to mate with it. As soon as the male bee alights on the cluster, the larvae latch on to the male bee.

This sorry male sucka then flies off with the larvae in tow, and then finally finds a real female bee, and the moment he comes in contact with her, the larvae latch on to her. She of course flies home to her nest, and there the larvae can happily disembark, and live and grow in food paradise, feasting off the nectar the bees work hard to find.

To quote from the paper:
”The aggressive chemical mimicry by the beetle larvae and their subsequent transport to their hosts' nests by the hosts themselves provide an efficient solution to the problem of locating a critical but scarce resource in a harsh environment.”

Now tell me science is not cool. (Update: There's also a podcast by one of the authors of the papers (via Selva)) 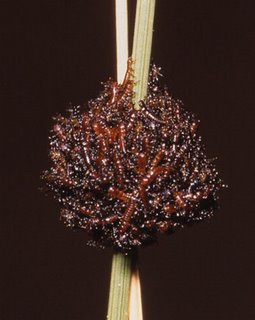 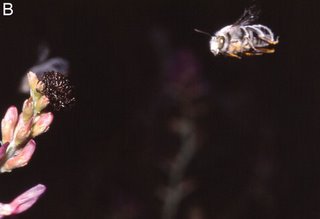 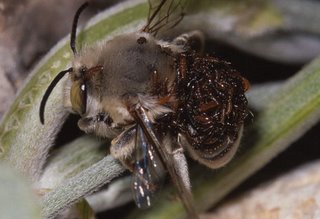 Very nice photographs and interesting post. Human beings are more in the parasitic category- especially indians in their own country who suffer from crab mentality.

oooh... lots of creepy crawlies. Btw, one question.. how do the the apple worms get inside an apparently hole-free apple? (I'm talking about the fruit here)

hiren.....the photographs are just pictures from the paper I wrote about and referenced. Interesting to see your thoughts on humans....and what's that about the crab mentality?

Vishnu......I think that's because the adult fly (of the apple maggot) lays its eggs under the skin of the apple. So the larvae emerge from the eggs inside the apple, and burrow their way deeper as they grow. So the apple may not seem too obviously damaged (with a large hole), but usually there is some distortion or depression in the area where the eggs were laid.....

I'm just remembering something I saw on discovery......so there must be more to this...

yes.....though I wouldn't recognize a blister-beetle if it was dancing in front of me. (I can recognize a cockroach though.......that should count for something).

My own research and expertise is more molecular, biochemical and cellular.

Astounding. What a sucker, this bee!